Tamed by the Virginian by Isabella Laase 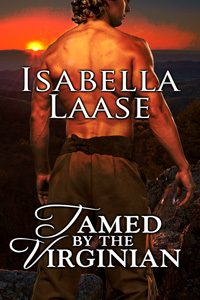 Eighteen-year-old Jory Logan has made more than her share of bad decisions, but things come to a head when she is involved with a robbery that goes horribly wrong. Facing a long prison sentence, she decides to play along with a mysterious woman who claims to be able to offer her an alternative to jail. According to this seemingly powerful stranger, Jory must spend four years in the past, learning the lessons she was never taught in her own life, and then she will be free to return to the present day with a clean slate.

Though she agrees to the woman’s offer, Jory does not truly believe such a thing could be possible, and thus it comes as a shock when she awakens in Virginia in the year 1785. Alone and utterly unable to fend for herself in a world so different from her own, she is relieved to be taken in by frontiersman Nial McKay and his brother. She soon discovers, however, that life on a farm is hard work and disobedience, disrespect, or failure to carry her own weight will earn her a sound spanking on her bare bottom.

Nial is determined to keep his relationship with Jory chaste and proper, but as time passes he is forced to admit that he is falling in love with the beautiful, spirited girl. Can he bring himself to claim her as his woman rather than his ward, or will his hesitance cause him to lose her forever? And when her four years is up, will Jory be forced to leave everything she has grown to love behind in the past?

Publisher’s Note: Tamed by the Virginian includes spankings and sexual scenes. If such material offends you, please don’t buy this book.

Jory reached to help him, but he pushed her hands away gently. “Nay, this is one present I am going to unwrap myself.” He slowly removed her shirt until she stood naked from the waist up. The light from the window filtered through the trees, and Jory stepped back into the shadows in a futile attempt to cover herself. The cool air of the cabin brought her nipples to alert. Despite her shyness, her skin begged to be touched.

Finally, he moved his hands up and down her back in long, fluid movements that left the memory of his strength behind. The familiarity of his hand began to relax her and made her aware of the empty feeling between her legs.

When she reached out to the buttons on her pants, Nial’s voice became sterner. “I’ll not tell ye again, Jory. You take your orders from me, or I’ll show you the kind of spanking you don’t like.”

Jory’s body grew hotter under his scolding, and the message was delivered to the ache in her pussy, but she forced herself to focus on his direction. She took a deep breath and put her arms to her neck while he helped her out of her breeches. When she was naked before him, Nial moaned softly. “Ye are as beautiful gift as I ever imagined, Jory.” He waited a few agonizing minutes without touch while her nervous energy intertwined with the need for his attention.

He finally began his exploration and whispered softly into her ear, “I’ll touch you everywhere tonight, lass. There is not part of your body that won’t be mine.” He started at the back of her neck and traced her curves with his fingertips all the way down to her ass where they massaged her muscles deeply. His gentle touch continued to increase her relaxation, and she closed her eyes to enjoy the feeling.

Soon, his hands moved to uncharted territory as he approached her breasts in small, delicate steps. She gasped for her breath and tried to lower herself into his hand, but he made her wait. Finally, he taunted and teased the sensitive skin around her nipples, and she had to fight the impulse to put her hand between her own legs.

With a suddenness, Nial filled his palm with the first grasp of her taut breasts. Handfuls were massaged fully while the electricity flowed through her body at every subtle movement. When he took her fully erect nipples in a pinch, she wriggled with a discomfort that only fired her passion.

Slowly, his hands worked down to her waist and pushed her legs open so he could access her soft, wet core. He toyed with the outside of her swollen lips before he circled her most sensitive of spots, but the taunting fingers refused to enter her. Jory desperately needed a release and tried to push them into her, but Nial scolded firmly, “I’ll not tell you again, Jory. Do I need to tie ye up?” The thought brought more wetness, and she considered disobedience just to experience the threat.

Eventually, his hand moved to her bottom, and he toyed with the outside of her private back hole. He whispered, “I’ll take you here someday too, lass. You’ll be all mine then.”