Don't Miss
Home / Blog / Tamed by Them Both by Rose St. Andrews

Tamed by Them Both by Rose St. Andrews 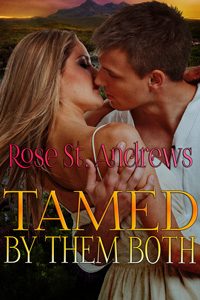 When she finds her fiancé’s time machine and begins taking it on trips to the past for her own amusement, Tara soon learns the hard way that in the old days men were quite a bit firmer than in her own era, and her bottom pays the price for her misadventures on more than one occasion.

Tara quickly ends up in way over her heard, with two men—her fiancé and a Highlander she met on one of her excursions—both set on punishing her very thoroughly for her reckless behavior and then sharing and enjoying her beautiful body in the most shameful of ways. As the stern, handsome men claim her first one at a time and then both at once, Tara is left spent and satisfied yet still yearning for more. But will her meddling with history eventually lead to disaster?

Publisher’s Note: Tamed by Them Both includes spankings and sexual scenes. If such material offends you, please don’t buy this book.

Tara squeaked and blushed, her humiliation bubbling up inside her. Their casual chatting, and their discussing of her body blended together to boost the raging fire building in her pussy. On and on it went, spanking and scolding, stroking and teasing, and a cold clinical lesson for Logan. Tara’s mind was consumed by passion; she buried her face in her hands, and lifted her ass and spread her legs. She craved everything Thomas was doing to her and knew that at any moment she would scream out another climax. Her body shook and shivered as her breathing came fast and hard, and then everything stopped. Before she could even start to process what he was doing to her now, he had hoisted her up and onto the bed. Squirming around so she was on her side, she turned and saw him headed for the door.

“Thomas, where are you going?” she called out.

He stopped and looked over his shoulder, and grinned. “To rest and wait for my turn. You take a lot out of a guy, sweetie, and anyway, it’s Logan’s turn with you again.”

Her head whipped around just in time to see Logan approach the bed.

“To keep your passion lit,” Logan said as he reached for her.

She squealed and then her eyebrows shot up as his hands seized her about the waist and forced her onto all fours, her head down, and he got behind her. Logan had always been passionate, but in the lovemaking department he was a bit old school. She didn’t know if it was his upbringing or the era, but unconventional positions during sex were rather rare. Before she knew it, he was on his knees behind her, his massive cock easily entered her pussy, and she moaned as he started to thrust and rock into her.

He chuckled. “It is different, eh? I have been learning much these past days, and now so shall you.”

She opened her mouth to ask what that meant, but let loose a high-pitched squeal as his hands roughly grabbed her sore cheeks. Fire shot from every point of his grip and plunged into her pussy. She wailed louder as his gyrations sped up, and she found that her body was in sync with his, and pure fire of delight consumed her mind. Seizing the pillow, she screamed her climax into it, even as his body pounded her like a jackhammer, his hands squeezed and kneaded her tender cheeks, and he finally exploded inside her. Multiple orgasms followed, her mind drifting off as stars danced before her eyes, until at last she slumped spent and limp upon the bed, drenched in her sweat and their juices. Her lungs burned as she tried to catch her breath, the endless barrage her heart was laying down eased off, and she was then able to lift her head.

Her body tingled and she gasped.

Another rigid cock was entering her drenched and throbbing pussy. She didn’t have to turn around to know it was Thomas, she knew his touch so well. Squirming around so she could get at least a glimpse behind her, she saw Logan’s fine firm bare backside sauntering toward the door, and felt Thomas slide his hands up and down her back.

“You can’t deny us anything, my dear,” Thomas said with a chuckle. “Remember, you belong to us both, and we shall both have our pleasures with you as often as we like, which is quite often!”

2018-08-24
Chris
Previous: The Master by Ashe Barker and Katy Swann
Next: The Alpha’s Stubborn Mate by Stella Blanche