Don't Miss
Home / Blog / Tamed for Their Use by Ivy Barrett

Tamed for Their Use by Ivy Barrett 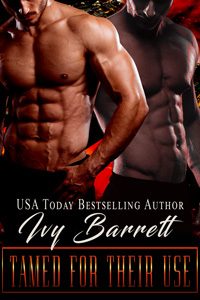 Though she is grateful to the Ventori who rescued her from a notorious drug cartel, Nichole Romano is none too pleased at being held in their custody and tested for her compatibility as a mate. Her patience runs out when two huge, handsome warriors carry her off against her will, but despite her fury she is quickly stripped bare and her defiance merely earns her a sound spanking.

Sintar and his brother Tarlon promptly set about training their new mate, but to properly tame the headstrong little human they will need to both punish her sternly and thoroughly for any disobedience and claim her beautiful body hard and often in the most shameful of ways.

Nichole’s shock at being treated in such a manner is accompanied by intense, helpless arousal which leaves her confused and humiliated yet begging desperately for her mates to take her even harder. But can their mastery of her body break down the walls she has built around her heart?

Publisher’s Note: Tamed for Their Use is a stand-alone novel which is the third book in the Ventori Masters series. It includes spankings and sexual scenes. If such material offends you, please don’t buy this book.

“Why are you being punished?”

“Because you asked me to welcome some women who didn’t deserve it.”

His tone changed, losing most of the autocratic snap. “I thought they were your friends.”

“We know each other, were trapped in the same horrible situation, but we were not friends. I don’t know if they expected us to ridicule them or what, but they were rude to us.”

“Well, they are not the governor’s mate. I asked you to represent me.”

“I’m sorry. I should have taken the task more seriously.”

“Good, then do you deserve this spanking?”

“Yes.” She did her best to sound angry, but the wait was driving her crazy. She wanted his firm hand spanking her bare butt and she wanted Tarlon’s cock thrusting into her and she wanted Sintar in her mouth—or in her ass—all at the same time. The unwanted interjection made her shiver. After last night, she might never allow that sort of sex again.

Sintar began the spanking in earnest. His hand fell with deliberation and purpose, raining spanks on both cheeks equally. She’d tried not to tease, but it was hard. The spanking really hurt. And yet the slow, flowing heat intensified her arousal. She kept her chest up, wanting her breasts to swing.

As if sensing her need, Tarlon was suddenly beside her, pinching her nipples and pulling hard on the tender nubs. How did he do that? He effortlessly knew exactly what she was thinking, feeling. It was almost as if—

“Such a naughty girl.” His deep voice scattered her thoughts. “I’m going to fuck you so hard you’ll scream.”

Sintar’s next spank was significantly harder and she cried out. Clearly he liked Tarlon’s idea. He delivered several fast, hard spanks to each side then crawled on the bed. He knelt beside her but faced her reddened ass. “Do it,” he urged Tarlon. “Shove your cock in her hole.”

She tensed. He meant her pussy, didn’t he? She looked over her shoulder as Tarlon took his place. His pants were bunched around his knees. As usual, he couldn’t be bothered to undress. He looked at her and smiled, easing her fears. Then he aimed his cock at her core and filled her with one hard thrust.

She groaned as his tip hit her cervix. She gasped. She’d known he was long, but damn. That had never happened before. Maybe it was the position.

It was her last coherent thought. He grasped her hips and went at her like a jackhammer. She braced with her arms and tilted her hips, offering him her pussy for his use, for his pleasure.

Sintar lightly squeezed her cheeks, spreading the fire and renewing the sting. She tightened her inner muscles and let herself float, safe and utterly free.

Nikki smiled, pleased by the strange sort of praise. Tarlon’s cock worked her hard and Sintar’s hands kept the fire blazing in her ass. Then she felt a finger nudge her anus and her eyes flew open wide.

“What you want doesn’t matter,” Sintar said harshly. “I want to finger-fuck your ass.”

She bit her lip. Not again. He was going to force his will on her in the most demeaning way possible. But he didn’t thrust inside, like she expected him to. He circled and caressed, drawing liquid from her pussy up to her other opening.

“Your body belongs to us, Nichole.”