Tamed by the Knight by Loki Renard 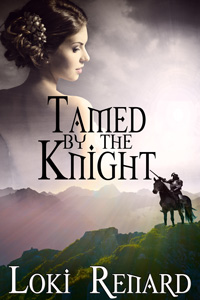 Nineteen-year-old Princess Madeline is not about to let anyone dictate who she can and cannot marry. She will settle for nothing less than a king, and her sister’s upcoming marriage to a prince is merely tedious—much like everything that goes on at court.

Madeline is used to getting her way, so when Sir Gregory—a mere knight—finds her making mischief and spanks her long and hard for her behavior, she is angrier than she’s ever been. To her absolute horror, after her encounter with Sir Gregory rumors begin to spread through the court that her virtue may have been compromised. Fearing a scandal and wanting Madeline off his hands, the king commands her to take the brave knight’s hand in marriage. But knights don’t inherit kingdoms, and Madeline intends to be a queen.

In an attempt to prevent the ruin of her plans, she flees the castle. Yet after Sir Gregory tracks her down and brings her home with a sore, well-spanked bottom, his firm-handed dominance proves to the feisty princess that, regardless of his station, his bearing is that of a king. She soon finds herself falling in love with her new husband, even though it means putting aside her dreams of a crown. But when an old and bitter foe attacks their homeland, both Madeline and Sir Gregory will need all their wits and all their courage to save their people.

“I tell you this now, Madeline. You are to be my bride and you will do as you are told. That means staying where I tell you to stay.”

Her defiance made his brow twitch. That was the only warning she received before he dropped to sit on the bed and pulled her over his thighs. Her skirts were thrown up over her back and his hand met her bare cheeks in a hard slap that resounded around the room.

“This is but a fraction of the punishment you deserve,” he said, clapping his palm against her tender flesh over and over again with fast, hard slaps that made her wail. “If I had more time, I would take you to task, but your father is waiting and the Dark King will not wait for a spoiled princess to be thrashed into line.”

“Sir Gregory! That is enough! It hurts!” Madeline raised her voice in complaint. The striking of his hand was leaving her hindquarters in a very unpleasant state, whacking heat into places she had not known it was possible to strike. His hand was landing not only on her bottom, but between her cheeks, slapping the tender flesh in the valley between the rounds.

Madeline bucked her hips, trying in vain to escape Sir Gregory’s wrath, but there was no hope of breaking free. He palmed one hot cheek and spread her wide, letting his hand fall with punitive intent against the soft puffy pouch of her lips. Madeline squealed in outrage, unable to believe just how far Sir Gregory was prepared to go in order to secure her obedience.

“Of course it hurts,” he said, slapping the lips of her tender quim with quick, stinging slaps. “I very much intend it to, and I will see to it that it hurts a lot more later. In the meantime, this will give you something to think on.”

“Stop!” Madeline gasped, grinding her hips hard against his thighs to avoid any slaps landing on her tender clit. The motion resulted in bolts of pure pleasure shooting through her loins even as his fingers punished her virginal cunt. “Please! Stop!”

He could not see her face. He could not know how it was flushing with heat, or how her lips were parting as she panted her way toward a most unlikely orgasm. Every time his fingers landed against her lips she became a little more lubricated, a little more ready for the intrusion of his manhood. He might have been focused on punishment, but her body had a different agenda. Every part of her quivering, writhing flesh was preparing to be speared by the cock she could feel pressing against her hip.

“Will you do as you are told, Madeline?” He stopped spanking, his fingers stilling on her thigh too far from her pouting pussy lips to be of any use.

“No,” she said, biting her lower lip as her hips moved in a slow circling grind.

Madeline parted her lips to laugh, but Sir Gregory did not seem to be speaking in jest. He called for irons and irons were indeed brought by his faithful squire. Madeline could not speak for the indignity of it all as the knight clapped the heavy iron about her ankle and thence secured it to a ring mounted in the wall. She said little as he deprived her of her freedom, content to give him a withering look that she imagined spoke volumes.

“That will keep you in place,” he said. “I will speak with you more anon.” With that he strode out of the door, leaving Madeline locked inside his chamber.

2014-12-01
+admin
Previous: The Outlaw’s Daughter by Emily Tilton
Next: Bound by Her Promise by Jaye Peaches