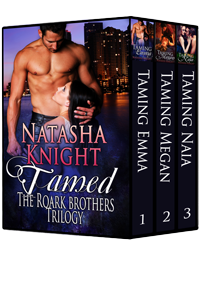 Tamed: The Roark Brothers Trilogy contains three best-selling books by Natasha Knight which tell the story of the firm-handed Roark brothers and the feisty women who are tamed by them. This trilogy includes:

The moment Luke removed the blindfold and recognized the beautiful, nearly-nude young woman standing before him as Emma Lawson, his best-friend’s little sister, he knew what he had to do. However, after buying her contract with the intention of giving her a firm lecture and taking her home, he cannot help but imagine the things he could teach her.

Emma spent many years as a teenager fantasizing about Luke, and when he is suddenly thrust into her life again she is torn between her fears and her desires, but her need to submit wins out. Emma chooses to stay and honor her contract, and she quickly finds herself on her knees before him, bare, bound, helpless, and forced to take whatever he wishes to give her… and he wishes to give her a great deal, relishing the chance to play Emma’s naked, trembling body like a finely-tuned instrument until she is blushing red and begging for more.

It is not long, though, before both Luke and Emma can feel that something much more than just physical attraction binds them together, but can they put aside their painful pasts and embrace a future together?

Jake Roark is the husband Megan never dreamed she could have—handsome, responsible, kind-hearted, and so much more. Before she ever said her wedding vows, though, she also knew that he was traditional enough to take a misbehaving wife in hand. When the bad habits from the wild life she led before she met Jake begin to resurface, Megan soon finds herself over his knee for a bare bottom spanking.

Jake’s firm hand and old-fashioned ways only increase her love for him, but when a mistake from the past is suddenly thrust into the forefront of her life and her marriage, will Jake’s love for Megan be strong enough to keep her in his arms forever, no matter what he learns about her?

Naia knows that Liam Roark has every right to be angry with her for sabotaging his career ten years ago with the accusation that he spanked her. When she seeks him out to ask his forgiveness, though, he will only give it on one condition: she’ll have to accept the bare-bottom spanking she once falsely claimed to have been given.

Although hesitant, Naia agrees, but after a painful and humiliating punishment which leaves her tearful and blushing, Liam sends her on her way. Despite her protests he is determined not to see her again… for his sake and for hers. He knows full well how strongly he yearns to dominate and have his way with her, and he fears she is far from ready to see that side of him. But Liam isn’t the only one who has to come to terms with the past, and when Naia persists, he finds himself unable to resist the twenty-eight year old beauty any longer.

Deciding to give her a taste of the life he lives, Liam brings her with him to his vacation home in Miami. He will demand her absolute obedience, thoroughly punish any defiance, and take her in any way he pleases, leaving her begging on her knees for more. But will the passion they ignite continue to burn hot once they return home?

He delivered the final blows to the tops of her thighs, which stung worse than her buttocks.

“Ten.” Emma lay sobbing, her body relaxing as he rubbed her sore buttocks and thighs.

She allowed herself to be picked up and cradled in his arms. With the back of her hands, she cleared away tears and wiped at her nose while she cried and cried. All the while he soothed with soft words and caresses, holding her to him, shielding her in the safety of his embrace.

She wasn’t sure how long she cried, but he didn’t stop her until she found herself reaching her mouth up to his. Her tears subsided and her body heaved its final sobs. His hands came to either side of her head, pushing away the hair that stuck to her face as their kiss grew in intensity and heat, both of their bodies now needing the physical release of orgasm. He stood, lifting her with him, and carried her through the house and up the stairs. Switching on a dim light in what she assumed was the master bedroom, he lay her down while he quickly stripped off his clothes. Emma watched buttons pop off in his rush, his chest a muscled mass under tanned skin, his arms defined, powerful. Her eyes settled on his hands and she decided in that moment that she loved them. She needed them on her, inside her, to deliver her pain and then to deliver her from it.

He took a foil packet out of the drawer in the nightstand and slipped the condom over his cock, then looked at her, his pupils dilated so you could only see a thin ring of blue around the black. It changed his face, made him look somehow more divine than human.

“Luke,” she said, needing him. She spread her legs wide, allowing him to settle between them. His mouth closed over hers again and his cock, in one hard thrust, drove deep inside her pussy. She held him tight while he lifted her, setting her farther on the bed and laying his weight over top of her.

“God, Emma,” he said, thrusting into her again and again.

Her pussy clenched around his cock and he pulled back, his hands on either side of her head.

“Look at me.” It was a rough whisper. “Open your eyes and look at me.” He fisted a handful of hair when she didn’t comply quickly enough.

“Master. Master…” her mouth opened, but no more sound came and she struggled to keep her eyes on him. His cock twitched inside her throbbing pussy and they came in a violent moment of climax that left them both weak and empty upon its completion.

2015-05-09
+admin
Previous: Saved by the Highlander by Emily Tilton
Next: The Alpha’s Hunger by Renee Rose