Taming His Brat by Piper Stone 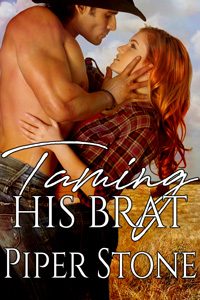 She came home looking for a new start. She found a cowboy dead set on taming her.

It’s been years since Cooper Dawson left her small Texas hometown, but after her stubborn defiance gets her fired from two jobs in a row, she knows something definitely needs to change. What she doesn’t expect, however, is for her sharp tongue and arrogant attitude to land her over the knee of a stern, ruggedly sexy cowboy for a painful, embarrassing, and very public spanking.

Rex Sullivan cannot deny being smitten by Cooper, and the fact that she is in desperate need of his belt across her bare backside only makes the war-hardened ex-Marine more determined to tame the beautiful, fiery redhead. It isn’t long before she’s screaming his name as he shows her just how hard and roughly a cowboy can ride a headstrong filly. But Rex and Cooper both have secrets, and when the demons of their past rear their ugly heads, will their romance be torn apart?

Publisher’s Note: Taming His Brat includes spankings and sexual scenes. If such material offends you, please don’t buy this book.

“You have no idea how long I’ve thought about fucking that pretty little mouth of yours.”

Opening her mouth even wider, she resisted gagging as his cock filled her mouth, the tip hitting the back of her throat.

Hissing in pleasure, Rex thrust in and out, every move careful, almost orchestrated, his hips gyrating.

“I have more in store for you, my sweet brat.” Rex grinned and pulled on her ankles, tugging her half off the bed. In one move, he turned her over and onto her knees, issuing several slaps against her backside.

“Ouch!” She was on her elbows, darting her head over her shoulder, trying to figure out what he was doing. His lust-filled expression caused another round of quivers.

“I adore having absolute control over you, teaching you to be obedient.” He smacked her several additional times before positioning his cock to her pussy, thrusting all the way inside. “Yes!” Gripping her hips, he held his position before moving up onto the balls of his feet, arching his back.

The force tossed her against the comforter, but she pushed up, keeping her arms locked, trying desperately to watch him, to see his face. The feel of his pubic hair shifting back and forth across her reddened ass gave her the most delicious set of sensations and she whimpered with every hard plunge.

“Every hole will belong to me.” Rex slipped two fingers beside his cock, filling her completely.

“Oh, Jesus!” She wasn’t certain she could handle all of him, his thick shaft, his long fingers, but as he moved them in and out, one against the other, she lolled her head, her pussy squeezing involuntarily. She was aware he’d removed his fingers, running them up and down the crack of her ass.

“I will fuck you here soon. Very soon.” He slid his fingers inside her asshole, wiggling them as he thrust in and out, every move gentle.

“Oh, shit.” Pain tore through her, creating another series of ragged pants. Stars floated in front of her eyes as he continued pushing, driving in and out little by little until they were all the way inside.

The words were thrilling, yet she shuddered as he continued, pumping harder. Faster. She knew she was going to come again, incapable of stopping the oncoming climax.