Taming His Cowgirl by Delta James 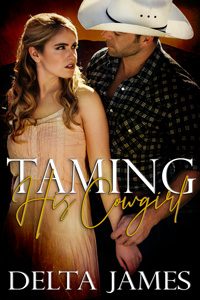 When her father’s will leaves control of the family ranch to Ryder Malone, the very same man who once broke her heart, Sierra Morgan is more than a little upset. The last time she saw Ryder she shot his hat right off his head, earning herself a long, hard spanking on her bare bottom that left her sore yet helplessly, infuriatingly aroused, and she had hoped to never see him again.

Ryder has not gotten over Sierra, and this time he isn’t going to let her run off without giving him a chance to tell her how he feels, even if that means lassoing her and tying her to a chair.

If she wants to inherit the ranch she loves, Sierra will have to work alongside Ryder for a year and convince him she is ready to run it. Though she plans to spend that year making his life a living hell, when she pushes the stern, handsome cowboy too far she soon ends up over his knee again. But this time her body’s response to his dominance cannot be ignored, and when Ryder takes her in his arms and claims her thoroughly Sierra is left in no doubt that she belongs to him.

Sierra is not used to doing as she is told, however, and when she is reckless with her safety she quickly discovers that Ryder will not hesitate to punish her in ways that leave her cheeks blushing crimson and her bottom sore both inside and out. His stern, shameful correction merely increases her need for him, but once the ranch is finally hers, will she still want him by her side?

Publisher’s Note: Taming His Cowgirl includes spankings and sexual scenes. If such material offends you, please don’t buy this book.

“You knew what you were doing was wrong, didn’t you?” When she failed to answer, he raised his hand up and brought it down hard on her backside. “Answer me.”

“Are you going to submit or do you need me to redden your pretty little butt some more before I fig you?”

Ryder waited for her to decide whether to yield or fight. When she sighed in resignation and went limp over his knee, he released the breath he realized he’d been holding.

He dipped his fingers into her wet pussy again and brought them up to try to ease the tension in the tight ring of muscle. He felt her relax and inserted the tip of his finger once again. He felt the natural resistance of her body, but felt she was resigned to accepting this as part of her punishment.

Ryder withdrew his finger, scored the skin of the ginger in several places, and slowly inserted the plug. It wasn’t very big, just a bit larger than his finger, but he felt for her first time it would be sufficient. He heard her sharp inhale of breath as he settled the plug in her and merely held it there. Even not peeled and only lightly scored, the ginger would emit a bit of its natural juice through the slits in the skin he’d made.

“Naughty girls who are being punished do not get a say in how long their punishment lasts. They trust that their loving partner will administer the needed level of discipline to curb their bad behavior.”

Ryder slowly slid the ginger root back before sliding it forward again. Sierra’s wail of distress was tinged with arousal and he smiled. Several times he slowly fucked her bottom with the ginger root until he could feel her squirm not from pain, but from arousal.

“All right, Sierra. You can get up but you turn and face me.”

“Yes, I am. You get to experience being plugged while you stand in the corner. If I think you are properly chastised, I may pull it out before I fuck you… or I may not. Now do you want to get up?”

She stood up slowly and did as she’d been ordered, gasping at the new sensation as she did so.

Ryder smiled as he looked at her body—flush from the intensity of the spanking as well as her arousal from both the spanking and the figging. He reached out and fondled her nipple, pinching it as he lowered his hand, making her gasp. He slid his hand between her legs. He wasn’t seeking to tease or pleasure but just to check to see how wet she was and to ensure she hadn’t dislodged her plug. He chuckled as he realized she was as drenched as he’d ever made her.

“Okay, little girl, you go back and stand facing the corner.”