Taming His Mate by Vonna Harper 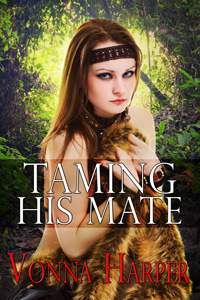 Sabin, the greatest hunter of his tribe, was given a simple task by the elders of his people: capture a healthy, fertile woman of the plains, tame her, and then claim her as his mate. The capturing part proves easy enough, and soon a beautiful, spirited female is bound, helpless, and awaiting his intimate attentions. But taming her will prove more difficult.

Believing herself too swift and intelligent to ever fall prey to any creature, let alone a man from another tribe, Kahsha is shocked when she’s caught by a powerful, handsome hunter. Soon she has been stripped bare, spanked hard, and brought to the edge of climax only to be denied. Yet despite her blushing cheeks and burning bottom, she aches for more.

Though she hungers desperately to be taken long and hard, Sabin will not make her his until she submits herself utterly. Kahsha knows that before long she will have no choice but to yield to her body’s demands, but will she survive the shame when she finally begs for him to claim her?

He easily flipped her onto her belly and positioned himself so he was kneeling beside her with a knee against her waist. As a powerful hand pinned her bound arms against her lower back, she turned her head so she could at least look up at him. He was smiling.

“You have a beautiful ass.” He patted her naked flesh. “Full and soft. Perfect for absorbing punishment.”

For several seconds he simply rested his hand on her buttocks. As she waited for him to demonstrate what he considered punishment, she fought, not fear, but the way his palm’s warmth was seeping into her. No man had ever claimed that part of her body in quite this way.

He expected her to allow him to do whatever he wanted to her? Surely he knew that would never happen. She might not be able to fight him right now, but her time would come. She’d—

The contact had stung but wasn’t what she’d call painful. Determined to let him know she wasn’t about to obey and behave, she glared at him.

“Ah, there it is, the defiance I was looking for.” He repeatedly swatted her, every blow sharper than the one before. “You would be of little use to me if you didn’t have a will. However, that will must be directed to my benefit.”

She didn’t know what he was talking about, what point he was trying to make. The only thing that mattered was that he was continuing to spank her.

2015-08-09
+admin
Previous: Unacceptable Behavior by Morganna Williams
Next: His to Claim by Kallista Dane