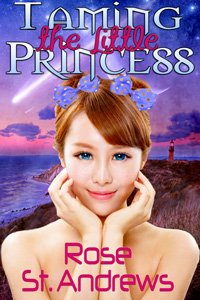 fter the leaders of the planet Illium contact Earth for the first time, Dr. Charles Putnam, an expert on alien cultures, is called in to meet with their ambassador. He is mildly surprised when the ambassador turns out to be the twenty-three year old daughter of Illium’s king, and he is quite a bit more than just mildly surprised—shocked, in fact—when he discovers that her father expects him to serve not just as her host and guide but as her guardian as well.

Charles soon finds that while Princess Illiana can be charming, she can also be rude, bossy, and high-strung, but when he speaks with the king and queen of Illium, they merely assure him that any measures he would consider appropriate for keeping a misbehaving human woman in line should suffice for Illiana as well. Though initially he remains hesitant to take her royal highness in hand, she finally pushes him too far and he puts her over his knee and spanks her little bottom.

Illiana responds impressively well to his correction, and as they tour the earth together, her innocence, friendship, and fun-loving spirit soon manage to sweep aside the barriers Charles has built around his heart over the years. He cannot help falling for the little princess, but when her time on Earth is up, will Illiana return home or remain with the man she has come to love?

Illiana snorted and rolled her eyes as she stood up. “Such matters are beneath me and are your responsibility, Papi. I wish to visit the park again and partake of the playthings there. After that, we shall play… ah, gin rummy.”

Papi stood and moved closer. “No, Illiana; this trip is important. We’re going to be meeting with the security council again, and it’s vital that you make a good impression. Now, come with me to my office, and pay attention to what I say.”

“You dare to refuse me?” she screeched, glaring up at him. “I will inform my father, and he will terminate you!”

“You were supposed to report to him days ago, young lady. Now you will do as I say or you will partake of an ancient form of discipline usually reserved for spoiled children.”

“I am no child! I am a princess of the royal bloodline,” she shot back.

In a flash he had her by the hand. The next thing she knew, he was seated, and she was lying prone across his lap. While rather comfy and almost intimate, it was not of her choosing, and thus she objected. She squirmed and struggled, but he held her fast.

“Very well,” he said, patting her small bottom. “This is what is known as a spanking, and whether or not you experience it again will be up to you. Behave and you won’t, be naughty and you will!”

Illiana gasped. He dared to threaten her with punishment at all, let alone a repetition? Then she truly gasped, and yelped in genuine pain as she felt his large hand impact her behind.

“Ow! You struck me? You laid hands upon royal flesh. Ouch! You did it again.”

Papi did just that, he struck her repeatedly, and quite hard.

“Yes, I did. A spanking is the striking of the buttocks numerous times with the hand or other implement. This particular spanking will not end until you agree to do as I instruct.”

“I realize that your race and civilization have existed for a great many millennia, Illiana, but your concept of never can’t be very different from ours,” he replied casually. “You have to ask yourself this: which is stronger, your behind or my hand?”

She refused to dignify such a statement with an answer. Instead she focused on escape, which proved fruitless; he had an iron grip on her ribcage with his left arm, and he kept right on smacking away at her poor bottom. The nerve endings in her glute muscles were proving detrimental to her well-being. Papi seemed quite adept at the spanking ritual, and he was applying sufficient force to her muscle tissue to stimulate the pain receptors in her flesh. She didn’t have to look upon said area to know that he was also disrupting the smaller blood vessels located there, which meant her flesh was taking on a reddish coloration. The degree of discomfort was increasing at an exponential rate.