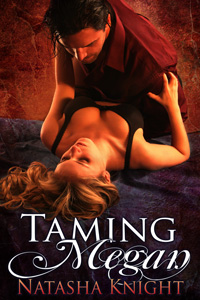 Jake Roark is the husband Megan never dreamed she could have—handsome, responsible, kind-hearted, and so much more. Before she ever said her wedding vows, though, she also knew that he was traditional enough to take a misbehaving wife in hand. When the bad habits from the wild life she led before she met Jake begin to resurface, Megan soon finds herself over his knee for a bare bottom spanking.

Jake’s firm hand and old-fashioned ways only increase her love for him, but when a mistake from the past is suddenly thrust into the forefront of her life and her marriage, will Jake’s love for Megan be strong enough to keep her in his arms forever, no matter what he learns about her?

She turned to find him leaning against his desk rolling up his shirt sleeves. She swallowed, finding something in that simple act so dominant, so sexy. He was preparing to spank her. She looked at him, his lean, muscular build. He was 6′3″, and the top of her head reached to about the middle of his chest. His dark brown hair fell over one eye and he brushed it back. His eyes, they were gorgeous. So blue she still remembered how she had embarrassed herself the first time she had laid eyes on him and had been unable to look away.

“Now tell me why you’re going to be spanked tonight, Megan.”

“Because I drank too much last night and broke my promise.”

Jake nodded, going around his desk to open a drawer. She watched as he retrieved the small wooden paddle and took a seat on the couch. He then reached his hands out to her.

She had seen that thing once. She’d even felt it on her bottom when he had jokingly swatted her with it. It had hurt and he’d only been fooling around then.

“Are you going to use that?” she asked before she took a step.

“I’ll use my hand first. That will just be at the end. Come here.”

Well, she supposed his hand would be more forgiving than the paddle. She walked over, her step slow, her eyes on his hands, his big hands. Megan swallowed and went to stand between his knees. He took her hands in his, his thumbs massaging her palms.

“I don’t want to tell you who you can and cannot see, but that Josie, I don’t trust her.”

“I’ve known her forever, Jake. I can’t just abandon her, not when she needs me.”

He shook his head. “Do you see a pattern, Meg? Every time you’re with her, we end up in some sort of argument…”

“Fine, discussion. Either way, just keep your eyes open around that girl.”

She nodded, not entirely doubting what he said but not able to fully accept it either.