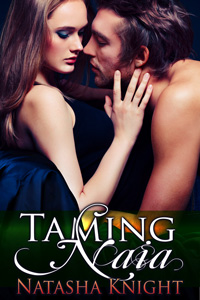 Naia knows that Liam Roark has every right to be angry with her for sabotaging his career ten years ago with the accusation that he spanked her. When she seeks him out to ask his forgiveness, though, he will only give it on one condition: she’ll have to accept the bare-bottom spanking she once falsely claimed to have been given.

Although hesitant, Naia agrees, but after a painful and humiliating punishment which leaves her tearful and blushing, Liam sends her on her way. Despite her protests he is determined not to see her again… for his sake and for hers. He knows full well how strongly he yearns to dominate and have his way with her, and he fears she is far from ready to see that side of him. But Liam isn’t the only one who has to come to terms with the past, and when Naia persists, he finds himself unable to resist the twenty-eight year old beauty any longer.

Deciding to give her a taste of the life he lives, Liam brings her with him to his vacation home in Miami. He will demand her absolute obedience, thoroughly punish any defiance, and take her in any way he pleases, leaving her begging on her knees for more. But will the passion they ignite continue to burn hot once they return home?

Also note that this book was published previously under the title Naia and the Professor.

His hand seemed not to tire as it delivered her punishment and by the time they reached thirty, she was begging him to slow down, ease up, give her a moment to catch her breath. She began to let out small yelps as the blows came harder over her already stinging backside and thighs, and even though she wanted to scream at him, she remembered his warning about someone hearing and bit back the louder protests.

When they reached forty, tears began to fall from her eyes. It was painful, no doubt, but at the same time, the idea that he, Professor Roark, stood behind her, spanking her bare bottom, turned her on like no fantasy of him ever had. As much as the spanking hurt, part of her was also very aware of the heat between her legs, the moisture there that dampened not only her sex but the tops of her thighs as well. She dared a glance back and her eyes settled for one brief moment on the huge bulge that pressed against the crotch of his jeans. She wanted him to fuck her, to spank her then fuck her as she lay bent over the desk. She needed him inside her, behind her, pounding into her until she lost herself in orgasm.

Finally, sixty came and he stopped. She was gasping for breath and crying. She moved to rise but he pushed her back down with one hand between her shoulder blades. He leaned over her so that his cock pushed against her bottom through the rough material of his jeans. He pressed his hips to hers and brought his mouth close to her ear. “There it is, that mythical spanking, long overdue,” he said, his breath coming short. “I hope it lived up to your expectations, Naia.”

She didn’t respond. She couldn’t.

Letting her up slightly, he shoved her blouse up and over her head then pushed her bra under her breasts, freeing the small, plump globes. He kneaded and stroked her nipples into hard points as she moaned with pleasure.

“Naia,” he whispered and without having to look at him, she knew he had an evil little grin on his face.

“Thank me for your spanking.”

He kept working her nipples.

“Thank you for my spanking, professor.” Oh, god, would he fuck her now?

“You’re welcome. Now tell me what you want, Naia.” The fingernails of one hand scratched one tender buttock, making her rise on tiptoe.

“Tell me what you want.”