Taming the Mistress by Dinah McLeod 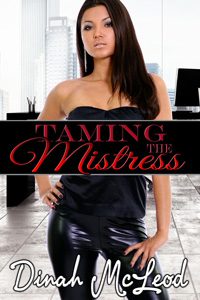 Having her bottom bared and soundly spanked by a firm-handed man is the most embarrassing thing Anna has ever experienced, but despite her blushing cheeks and burning backside the humiliating chastisement leaves her intensely aroused and yearning for more of James’ masterful touch. When she surrenders her body to his skilled, dominant lovemaking, she cannot deny that it brings her more pleasure than she would have thought possible, but can she allow herself to submit to a man without giving up everything she has worked so hard to achieve?

My pants and panties were whisked down so fast I hardly had time to feel the breeze in the room before his hand was smacking down on my bare skin. His hand bounced from cheek to cheek, once, twice, three times. And it was hard.

I gasped, surprised by how the tempo of the spanking had changed. That gasp quickly became a moan as he showed no signs of stopping anytime soon. My hands formed claws that gripped at his knees. I knew he’d feel my nails digging in through his pants, but he didn’t pause in administering the punishment he suddenly seemed so intent upon.

“James!” I yelped when I could take no more. Every stinging smack had built, one on top of the other, until my bottom was hotter than a furnace. It was an itchy sting that I didn’t know how to rid myself of. All I knew was that I had to make him stop.

“When you are over my lap,” he replied, his hand smacking me in time to his lecture, “you may address me as sir or master. You do not tell me to ‘do it,’ am I understood?”

I could barely make sense of what he was saying through the intensifying pain in my ass. “James, please!” When he paused, I thought my heartfelt plea had gotten through. That was, I thought so until he spoke. When I heard the hardness in his voice, I realized at once that I’d been mistaken.

Then there was nothing but the feel of his hand knotting in my hair moments before he pulled me up to look him in the eye. My breath caught in my throat—I was shocked by his response, but when my heart picked up speed it had nothing to do with fear. When I met his eyes, his normally warm, brown depths seemed cool. Somehow, it made my mouth dry in a way that wasn’t at all unpleasant.

To my shock, I realized I was getting turned on. I should have been horrified with myself, but I wasn’t. I was far from ashamed.

“What did I just tell you?” he demanded, his voice dangerously low.

He smiled then, a slow, sexy smile that told me more than words ever could. He was enjoying this—and perhaps all the more so by the fact that he knew I was. I didn’t know how he knew—maybe it was from years of being a dominant—but he did.

“Now, there’s a good girl.” He relaxed his hold on my hair and began stroking it with his other hand, making little shivers of delight run up and down my arms. “You’re going to remember in the future, aren’t you?”

2016-07-02
+admin
Previous: Taken by Her Mates by Grace Goodwin
Next: Returning to Her Master by BJ Wane