Taming Their Pet by Sara Fields 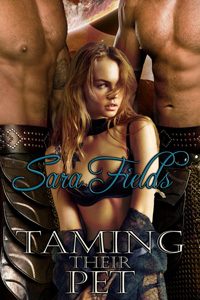 When the scheming of her father’s political enemies makes it impossible to continue hiding the fact that she is an unauthorized third child, twenty-year-old Isabella Bedard is sent to a detainment facility in deep space where she will be prepared for her new life as an alien’s bride.

Her situation is made far worse after some ill-advised mischief forces the strict warden to ensure that she is sold as quickly as possible, and before she knows it, Isabella is standing naked before two huge, roughly handsome alien men, helpless and utterly on display for their inspection. More disturbing still, the men make it clear that they are buying her not as a bride, but as a pet.

Zack and Noah have made a career of taming even the most headstrong of females, and they waste no time in teaching their new pet that her absolute obedience will be expected and even the slightest defiance will earn her a painful, embarrassing bare-bottom spanking, along with far more humiliating punishments if her behavior makes it necessary.

Over the coming weeks, Isabella is trained as a pony and as a kitten, and she learns what it means to fully surrender her body to the bold dominance of two men who will not hesitate to claim her in any way they please. But though she cannot deny her helpless arousal at being so thoroughly mastered, can she truly allow herself to fall in love with men who keep her as a pet?

Publisher’s Note: Taming Their Pet is a stand-alone novel which is the third book in the Captive Brides series. It includes spankings and sexual scenes. If such material offends you, please don’t buy this book.

The fingers within her entrance pulled out and someone pulled her cheeks apart. Her eyes grew wide as the digits explored backward toward her tight little rosebud. She squeaked in shock.

Panicked, she tried to jerk away but Zack pulled her head back even further and she keened in response as one of the men behind her spread a slippery liquid over her bottom hole. Ashamed, she whined as a digit pressed against her tight rim of muscle. She fought against it, tightening her bottom cheeks, and the hand pulled away.

Someone took a hold of her hips and held her steady. A harsh sound of a smack rang out through the room and it took a long second for it to register in her mind that she’d been spanked. The sting hit her as the second spank fell and she yelped in surprise.

Over and over, the heavy palm disciplined her backside and she had no doubt in her mind that it was Noah. The harsh spanks were relentless, leaving her bottom burning and stinging in no time at all.

“Please stop,” she begged around the gag, squeezing her eyes shut from the sudden sting.

“You will not deny me access to your body, pet. I own you and when I expect access to your naughtiest hole, you will give it to me,” he scolded and she cried against the rubber ball in her mouth.

When her punishment ended, the fingers returned to her bottom hole and she did her best not to tighten or clench against him. Her sore backside throbbed and ached and she didn’t want to repeat the lesson that had just been applied there.

The shameful nature of the act left her entirely speechless, embarrassed, and flushed to the core. One finger breached her channel and she moaned against the muzzle in her mouth. Her pussy clenched around empty air and she couldn’t help but notice that she was dripping wet. She was behaving like a wanton slut.

The finger pressing into her bottom hole burned as it widened her. The stretching sensation hurt a little, but not in a terrible way. In fact, the more she thought about it, the more turned on she became. Confused, she tried her best to understand her body’s passionate reaction. Surely there was something wrong with her to enjoy such an embarrassing deed, right?

A second digit pressed into her and she whined as her bottom hole widened to accommodate him. The soreness passed after a few long moments as he pushed deeper and deeper, before slowly pulling back out. Again and again, he did this and her body flushed with heat every time. She should be ashamed of herself.

When a second hand pressed against her clit, her body hummed with need once again. Zack forced her eyes to his and she moaned at the sensuality within his gaze. Fingers swirled around inside her bottom and up and down her slit, overwhelming her completely. Zack pulled her hair hard once again and pain intermingled with pleasure in an intoxicating mix that subdued her completely.

At the edge of relief, she fought against it, but it was useless to try to stop a train once it hurtled off its tracks. Her world burst with pleasure and she screamed as her orgasm washed over her, leaving her a trembling wet mess of fervent desire. Her muscles quivered as ecstasy racked her body. Passion enveloped her completely, setting every single nerve on fire with her release.

2017-09-02
Chris
Previous: His Pet Human by Rose St. Andrews
Next: An Old-Fashioned Man by Celeste Jones