A Taste of Submission by Jamie Fairfax 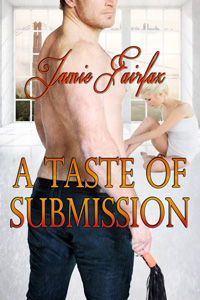 Jenni Ryan is a confident businesswoman who has never had trouble holding her own with men, so it comes as a shock when Charles Connelly makes her feel like a blushing schoolgirl with a single comment as she pitches him an ad campaign for his company. Charles is strong, handsome, and unafraid to take control, and Jenni knows instantly that there is something different about this man. After he asks her out and shows her a night of passion unlike anything she has ever experienced, she is left longing for more, and when he informs her that he is a dom and he would like to introduce her to a D/s relationship, Jenni is nervous but excited enough to give it a try.

“Next we will move on to your kneeling positions. The first is ‘kneeling attention.’ This is the same as standing attention, except done on your knees. Get on your knees and have them spread about two feet apart, keep your back straight, hands clasped behind your back and head bowed slightly.”

Jenni got down on her knees and got into the position as Charles had instructed. She straightened her spine as much as possible.

Charles stood directly over her and Jenni felt very small and very naked, she felt how powerful Charles was in this position. Once again she was surprised by how much this thrilled her, how much she loved being dominated by this man, how she yearned to serve him and to receive his cock and fingers and mouth as her reward.

She was shaken out of her thoughts by Charles’s next command, “Your next kneeling position is ‘presentation.’ Keep your ankles close together but move your knees as far apart as you can and still be comfortable. Place your hands on your thighs with your palms up and bow your head. Then sit back on your ankles and keep your back straight.”

Jenni moved as commanded, as she moved her knees apart and sat back on her ankles she felt her pussy open up and it was pushed forward. As she grabbed her hands behind her and straightened up she felt her breasts push out. She understood why Charles called this position ‘presentation’ as she presented her pussy and breasts to him. Her head was bowed and she could see Charles feet as he walked around her.

“Wonderful. This is my favorite position and you always have permission to take this position unless I’ve instructed you otherwise. Just seeing you in this position makes me hard. Would my slave like a taste of her master?”

Jenni was surprised and excited; she had not been expecting this but so much wanted some part of Charles, some relief for her sexual hunger. “Oh, yes, Master, your slave would love that.”

“Raise your head but remain in position.”

As Jenni raised her head Charles stepped in front of her, straddling her and unzipped his pants. Her head was directly below his crotch and as he pulled out his manhood she saw it was indeed rock hard. She looked up at it, marveling at how beautiful it looked to her, and how much she wanted it in her mouth.

Charles moved his cock down and toward her mouth and Jenni eagerly wrapped her lips around his shaft. He started to slide it in and out slowly, giving her lots of time to play with it. She was trying to make love to his lovely manhood, to swirl her tongue all over it, to let it slide down her throat as far as possible. She loved how it filled her mouth, how she moved her tongue all around it, the way it felt as her lips increased pressure on his shaft. It was blissful, in all of her times sucking cock it had never felt quite this good.

2014-10-31
+admin
Previous: The Newsletter Era Begins…
Next: Bared by the Billionaire by Kallista Dane