Taught to Serve by Jaye Peaches 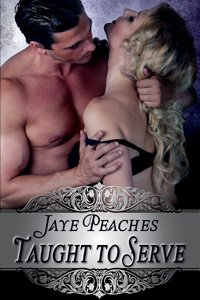 Though she is both beautiful and intelligent, Casey has bounced from one job to another as a result of her failure to truly apply herself. As she sits on a park bench crying after yet another dismissal, things show no sign of changing anytime soon… until a passing stranger sees the tears in her eyes and comes to her rescue. The handsome, smartly dressed man by the name of Robert informs her that he is in need of a personal assistant and she might be a good fit.

Casey soon learns that her new boss will be a demanding one, and insufficient attention to detail will earn her a trip over his knee for a bare bottom spanking. To her surprise, Rob’s firm discipline only increases her attraction to him, and their relationship quickly grows into a passionate romance. She finds that Rob can be just as firm a boyfriend as he is a boss, but even as he teaches her to submit to him completely he also shows her pleasure—and love—beyond anything she has known before.

“Assume the position,” said Rob from behind her back.

The position. The wording was specific. It did not mean his lap, this was not to be a spanking. Nor did he mean the desk; the support it gave would be removed. She had to bend over in the middle of the room and grasp her ankles. Her heart thumped loudly, and she swallowed down a wave of nausea.

Her legs had to move apart to enable her to hold her legs firmly. Between them, she watched as Rob went to the bureau—a piece of furniture she many times had come to dread as it held his harshest of implements. A beautiful cabinet, inlaid with marquetry and ivory, it creaked as he opened the doors at the front. Hanging up inside were a range of spanking implements. There were wooden paddles of different shapes and sizes. Next to them, the leather straps, tawse, and finally the canes. Made from various materials both natural and synthetic, they formed a formidable collection.

Casey had never been caned before. Paddled hard, whipped with his strap or tawse, but not the thin rod made famous by the public school system in bygone days.

“You’re going to find out why six of the best is all that is needed. Six whacks of this cane will equate to minutes of being spanked with my thickest paddle. It will leave neat welts across you bottom. Marks to remember your bad behaviour. After I have administered your punishment, you will stand in the corner, just like a naughty schoolgirl. Except, Casey, this is not fun. This is not playing. I am very disappointed in you. I thought you had improved your petulant attitude. Now I know why you failed in your previous job.”

His last words were a huge blow. Bigger in magnitude than the cane he was about to wield. Rob had prised apart her weakness and found that it was her mouth, which detached itself from her brain as she spoke without care and attention to those she was addressing.

Her parents never smacked her when she cursed them. Even her granny had only ever glared at her when she became sassy. Nobody had managed to find a way to curtail her blabbering tongue and its tendency to speak before engaging her rational mind. But Rob would not show her leniency; her wayward behaviour would be tamed by him regardless.

While Casey’s legs trembled, her skirt was lifted up and folded away from her waist, exposing her bottom. The tiny thong was left in place. The cane would land on her naked buttocks, and regrettably he would not show interest with what lay between her cheeks.

Casey expected a whoosh as she heard his practise swings. She felt the tapping as he measured the distance and location of his target. What she did not anticipate was the pain.

2013-12-09
+admin
Previous: Marshal’s Law by Maddie Taylor
Next: The Art of Discipline: Dani’s Discovery, The Mockingbird Chronicles, Book One by Stardawn Cabot and Alexandra James