The Alien’s Captive by Ava Sinclair 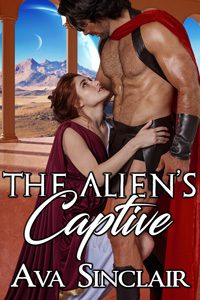 General Augustus Bron, Commander of the Traoian Iron Guard, has never approved of the practice of capturing human women and training them to serve the rich and powerful of his world. He knows, however, that success in politics is all but impossible without the social status granted by ownership of a human pet, and with his planet in desperate need of new leadership he sees little choice but to obtain one for himself.

When she pieces together a connection between five missing women, reporter Phaedra Ellis knows she is onto something big, but before she can go public with her story she is taken from her apartment in the middle of the night and brought to a facility unlike anything she has ever seen before. To her shock, Phaedra is informed that she is no longer on Earth, and more disturbing still, she is now the property of a huge, powerful alien warrior who will not hesitate to bare her bottom and spank her soundly should she dare to disobey him.

After an intimate, deeply humiliating medical examination confirms her suitability as a pet, Bron begins Phaedra’s training. Though taming her will require a firm hand and punishments much more shameful than a mere spanking may be necessary from time to time, he has no doubt that he is up to the task. But despite his efforts to remain stoic, his beautiful little human has soon claimed a place in his heart. When Bron’s enemies seek to use his growing love for Phaedra against him, can the battle-hardened soldier find a way to protect both his planet and his pet?

Once she was in position, Bron reached down and picked her up. They were in his personal training chamber, where the raised dais where he sat observing her positions loomed over the floor mat she practiced on. But now he was taking her across the room to an L-shaped table that rose from the floor. Phaedra tried not to panic as Bron bent her over it and hooked her wrist cuffs to the ends. There were ankle cuffs on the bottom, and he spread her legs before securing them.

“I expect obedience from you even when we are not together,” he said. “Obedience in every moment.” A panel opened on the side of the table. There were several small, oval probes with flanged ends. Bron withdrew one now, and Phaedra looked back in trepidation.

She winced as he moved it between her legs, then gasped as he ran it up across the cleft of her pussy, stopping when the tip of it reached the pucker of her anus. Phaedra felt the ring of muscles tighten as Bron wordlessly pushed the rounded end of the probe against her bottom hole, then gave a little cry when she realized she could not resist the breach. The probe, roughly the size of a man’s forefinger, caused Phaedra no pain as it slid in, its flanged end holding it snugly in place.

“Since this is your first offense, the sting will only be a Level 2.” He delivered the words like a judicial sentence.

And then Phaedra felt it; at first, the sensation in her bottom felt like a tingle. Then a heat. Then she lurched as the heat turned into a painful prickle.

“Aaaaahhh!” She tried to move away from the sensation, but the table’s shape combined with Bron’s huge hand pressing into the small of her back prevented it. “Take it out!” she cried a moment later, but behind her, Bron was silent.

Phaedra was surprised when he moved his hand and undid the restraints on her wrists and ankles. By now, the sting was intensifying, and Phaedra’s dignity fled as she danced around, her fingers plucking at the flange only to reveal it was melded to her skin. Hot tears coursed down her face as the burning sensation of the plug increased.

Finally, in a gesture of total helplessness, Phaedra sank to the floor, her hands clutching her burning cheeks, and looked up at Bron imploringly.

“Take it out,” she pleaded. “Please. I won’t touch myself again!”

“Rise.” His command boomed through the room and Phaedra leapt to her feet. “I will remove the punishment probe, but only after the rest of your punishment.”