The Alien’s Captive Carries Off a Top 100 Spot 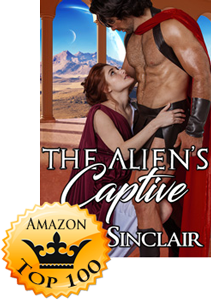 General Bron, needed to bolster his position and he decides he needs a slave, but not your average slave . Defiant, willful and beguiling that was the best way to describe Phaedra. Everything he didn’t need but he wanted to break her to his will, mold her, guild her… educate her in ways to please and tantalize. Yes there were plenty of woman who were objectified, but this was an alien planet and they followed the rules of the flesh. The woman submitted beautiful and relished their station. Phaedra was on the fast track to break the disappearances of woman and she was just to smart for her own good. Until the evening that changed her life FOREVER. She wasn’t supposed to be possessed, she never wanted to be a man’s plaything… Until him she was his willing…. Allen’s Captive! Ava Sinclair is mesmerizing, when I can’t imagine it getting any better… She literally blows my mind. The written is what I have come to expect… perfection. The characters are alluring and seductive, I wasn’t put off by any part of the book. It had just enough sci-fi to keep me glued to the reader.This is just another amazing book by a gifted author. It is always a pleasure to escape my life to read a little piece of Heaven!!

I really liked this book. Even though the women are called pets in this story, I viewed it as more or a Master/slave story. The General does not believe in having a human pet but is talked into by his political sponsor. Phaedra gets too close to the answer to some missing women and is abducted to keep her quiet. The actual story (beyond the relationship between the two protagonists) is very good. The General has seen the way his people are viewed by others and wants to ensure the survival of his race and is willing to go against his personal views (the owning of a human pet) to try to bring about the change required for that survival. The premise for the book could have lead to a much longer book but the author does a great job pulling everything together for a satisfying ending (including a nice epilogue). My opinions and ratings are based on my love of reading interesting stories and not on included sex/punishment/BDSM scenes (which I know virtually nothing about).

Laurel @ Amazon.com “Dark Romance with a happy ever after by Ava Sinclair” on July 19, 2016
This Sci-Fi is a departure from the author’s other book and it’s awesome. The storyline is well developed and the writing by this gifted author is wonderful. There is a lot of Non-Con in the beginning and the epilogue explained the changes to the planet with three moons. The characters thoughts, feelings, emotions and dialogue were delved into with insight. This book was a fast paced page turning action adventure with many twists and turns and I couldn’t put it down until I finished it.

★★★★★ SH @ Amazon.com “Smoking hot sci-fi!” on July 18, 2016
A smoking hot sci-fi with a ton of steam! The plot was great and offered suspense and danger in a wonderful sci-fi world, the characters were strong and I found myself quickly reading and turning the pages to find out what was going to happen next! I adored the ending! Nicely done! I received this book from Stormy Night Publications as an Advanced Reader Copy.

★★★★★ H. L. Savinoon@ Amazon.com “So hot” on July 18, 2016
This author is a fabulous writer. The storyline was solid, but the writing really shone during the hot and frequent sexy scenes. I underlined a bunch. Bron is a great dominant and Phaedra submits while retaining her strength. A well written fantasy. If you like discipline, mastery and submission, this one’s for you!