The Alien’s Collar by Loki Renard 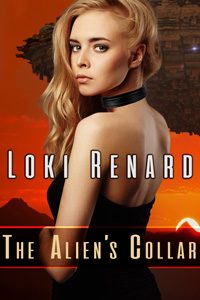 After she is taken captive and forced aboard an alien ship, twenty-five-year-old Kelly Kennedy wastes no time in attempting an escape, but her efforts merely bring her to the attention of one of the alien commanders, and the huge, roughly-handsome warrior chases her down, binds and gags her, and puts his collar around her neck.

Though Rake is not used to defiance from the human women he is tasked with capturing for future breeding, the thought of mastering a headstrong female like Kelly appeals to him, and he decides to take her as his pet. He has no doubt that taming her will require a firm hand, however, and her sharp tongue quickly earns her a painful, humiliating spanking on her bare bottom.

In spite of her fury at being treated in such a shameful manner, Rake’s strict correction arouses Kelly deeply, and soon she is writhing in ecstasy as she is brought to one quivering climax after another. Over the coming days, she learns what it means to be utterly and completely claimed by a stern, dominant alien warrior. But when the time comes for Kelly to perform in a trial of obedience to prove that she has been properly trained, will she do her owner proud?

Publisher’s Note: The Alien’s Collar includes spankings and sexual scenes. If such material offends you, please don’t buy this book.

Her words turned to squeals as he started spanking her. Hard. His palm covered both her cheeks easily, and the flimsy cotton of her shorts did nothing to protect her from his disciplinary wrath. They did nothing but get in the way, actually, the same as the rest of her clothing.

Rake decided to dispatch with all of it. The shorts slid down her legs quite easily, stuck at the knees for a moment as she kicked her legs, then fell to the floor. She was wearing a thinner, smaller, tighter item of clothing under them and he pulled it down similarly, baring the pretty rounds of her bottom. She was such a shapely creature, all curves and soft lines. Most of her soft skin was quite pale, but there were already pink regions where his palm had met her naughty rear.

Holding her firm as she complained, he set about removing the clothing over the top part of her body too. The top came off, leaving her blonde hair ruffled, and the undergarment snapped off quite easily thanks to a series of clasps in the back of it.

“What are you doing?!” Her words came in a soft, anguished, curious gasp.

“I want to see the effects my punishment is having,” he said, running his free hand along her body, from the top of her head all the way down to the backs of her calves. He liked how she felt, soft, supple, her musculature hardly pronounced, but evidently toned from the efforts of surviving in a desolate post-invasion war. She was beautiful. So beautiful it was a pity that he already had to waste so much time disciplining her.

“You will not need this clothing any longer,” he said. “It is an arrogance which makes you believe you are separate from the rest of the animal life on this planet. You are an animal, Kelly, and like every other animal, you can be tamed and taken as a pet with the right training. I will enjoy training you. Your struggles amuse and excite me.”

Perhaps she would settle now that she was naked. She certainly did not make any aggressive sounds as he stroked back and forth along the length of her body, sure he could feel some of the tension fading from her muscles.

“Give me my clothes back,” she muttered finally.

“You will not need clothing here,” Rake replied. “And even if you were to wear a covering, it would be something much cleaner than those rags. They look as though they have been worn for days on end.”

“That’s because you invaded,” she snarled back, raising her voice. “It’s not like I usually run around the desert in filthy clothes.”

Rake responded with a firm swat to her lower cheeks.

Her bottom was pinker now, her skin pale all the way to mid-thigh where a light golden tan began, exposure due to the planet’s rather harsh sun. What she did not know, could not have known, was that her rages did not affect him in the slightest. He was a warrior, born to cries of blood and anguish. Her little curses and shouts were nothing to what he had heard, and the faint color on her cheeks was of no consequence. She was not being harmed. She was learning for the second time that day that physical discomfort was the result of trying to resist him.

2017-09-10
Chris
Previous: Claimed by the Commander by Sassa Daniels
Next: A Little Atonement by Maggie Ryan