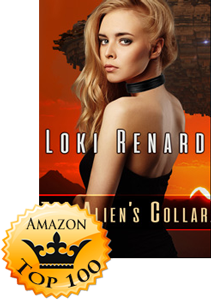 Loki Renard’s new book, The Alien’s Collar, has made the Top 100 in the Science Fiction Romance category on Amazon! Congratulations, Loki!

★★★★★ Bookworm555 @ Amazon.com “I am never disappointed in a Loki Renard book!”on September 15, 2017
I really love this author (though I must admit that while I enjoy her plots, world building, and characters – I tend to skip over the sex parts). This author builds worlds and characters that keep you engrossed in the story she is telling. I enjoy the Sci-Fi aspect of this book but wasn’t really crazy about the way the aliens went about obtaining new mates (I prefer negotiations vs force). Except for spankings and other harmless punishments. the aliens take care of all of the women that they have taken. The book ends quickly and even though a great conclusion is given, I always want it to be longer and as detailed as the story itself.

If you like sci-fi, a little spanking, a feisty female, an a strong dominant alien, I definitely recommend reading this book.

I TOTALLY LOVED THE HITCHHIKERS GUIDE TO THE GALAXY REFERENCE! (So long and thanks for all the fish!)

★★★★★ Sue B @ Amazon.com “Kelly had been holidaying in Australia when the “Aliens” attacked earth capturing females of child bearing age….” on September 15, 2017
Kelly was not a woman than went down without a fight and she certainly ensured that the giant muscle-bound aliens knew this for a fact, after escaping the ship and then out running and maneuvering several of them she was finally free of the, or so she had thought!!!

Rake had watched from the command station high in the sky as the small human woman had escaped from the ship, she them proceeded to out maneuver and out run several warriors, even biting one that got too close.

It was said that a Valvadien recognised his mate as soon as he saw her and even from this distance he knew that he had to have her and so he had begun his hunt and capture, they had expected to have enough time to capture many young women but when the “Feeble Humans” had turned the tables on them they had left with only one hundred females all for the High Commanders….

The Over Commander had never before been bested by a species and this had caused him to be bitter and resentful, as his body failed it seemed that his hold on his supremacy also faltered and he was determined to make the Human Females boarded on the “Vault” the Valvadiens mobile planet/ship in pay dearly for this humiliation even though many had already been mated.

The only High Commander that dared to stand up and face the Over Commander was Rake he was prepared to put it all on the line to save his mate, Kelly was a spirited and determined she had a quick mind and he knew that this tenacity, this spirit would breed strong warriors…

This was another amazing book from Loki as always it was very different from anything she has written before; the main characters were marvelous they were described in such detail it was easily possible to visualise them….

The story was exceedingly well planned, and the description of the vault and the lifeforms on board were amazing, at times I imagine that Loki’s mind must be continually working on new ideas they are always so varied and very original.

I highly recommend this book, I can assure you that if you love aliens and strong female characters with lots of hot and sexy interaction you will not be disappointed!! I enjoyed the book and look forward to reading any future publications; keep up all the great writing.

★★★★★ Dyane @ Amazon.com “It makes passionate look like patty cake” on September 15, 2017
If you like smoking hot, steamy alpha male alien romances, this is definitely the book for you. But it is more than just hot sex scenes. I found myself giggling uncontrollable at some points. The writing is so good and the characters so well developed that I feel as if I am experiencing it myself. Rake is huge, strong, powerful, but understanding. Kelly is small, smart, sassy, and spirited. I love that Rake is immediately committed to Kelly, even though she is only committed to escaping him …. at first. But even the strongest woman can be tamed, by the right alien. I received this book from Stormy Night Publications as an advanced reader copy.

2017-09-16
Chris
Previous: Claimed by the Commander Grabs a Top 100 Spot
Next: A Little Atonement by Maggie Ryan