The Alien’s Leash by Loki Renard 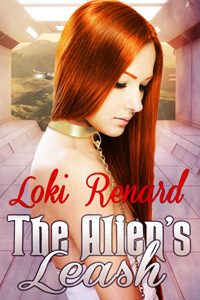 Lord Kyren Cirrus has spent years collecting unique and interesting creatures from across the galaxy, but the moment twenty-year-old Kara Dyrek is delivered to him he knows she will not be just another specimen to study. This beautiful, feisty little human will be much more than that. She will be his pet.

Tara is none too pleased to have been captured, caged like an animal, and taken to a far-off world, but her protests are ignored and soon enough she is blushing crimson as she is thoroughly and intimately examined, then brought to a shameful climax by Kyren’s skillful ministrations.

Her new master makes it clear that he will expect obedience from his pet, and when she attempts an escape he quickly proves more than willing to bare her bottom for a painful, embarrassing spanking. The strict punishment leaves Tara burning with need, and Kyren wastes no time in claiming her and mastering her body completely.

It isn’t long before Tara begins to enjoy her new life, but when she catches the eye of a powerful government official and he tries to take her for himself, will Kyren do whatever is necessary to keep his beloved pet?

Publisher’s Note: The Alien’s Leash contains spankings and sexual scenes. If such material offends you, please don’t buy this book.

Certain she was about to be punished hard, Tara bit him. She bit him hard and more than once. She bit everything she could reach. His hands, his forearms, his coat—the latter was the least satisfying of the three targets. Kyren acted as though it didn’t hurt, though she could see the marks her teeth left with every snapping bite.

“I warned you,” he growled, pulling a strip off the uniform. He wound it around her head and mouth, making further biting impossible. “I warned you not to bite me again.”

She was naked now, totally vulnerable as he pulled her over his thighs. Tara swore impotently as his hand came down on her bare butt and she let out a loud yowl as the slap burst through her system, alerting her finely tuned survival instincts that there was pain and there would be more pain to come.

It was impossible to escape Kyren’s grasp by struggling. He was infinitely stronger than she was and he had a talent for grasping her in such a way that she couldn’t struggle properly anyway. As the slaps continued to land, making her bottom blaze like the red-hot coals of a fire, and her struggles continued to get her nowhere, Tara decided to change her response. She knew well enough that fighting wasn’t always the way to handle a problem. If confronted with a dangerous cat, it was better to freeze. So she froze over his lap, stilling her reactions so that even when his hand landed she didn’t move a muscle or make a sound.

After slapping her bottom a few more times and getting that total lack of response, Kyren pulled the gag out of her mouth.

“What are you doing, brat?”

Of course, she didn’t answer him.

“I see,” he said. “Well, Tara, defiance is still defiance whether it is biting or silence. You will speak when you are spoken to and you will stop these games.”

He spanked her bottom sharply. “The more defiant you are, the more punishment you will receive.”

“I think I can make you care,” he said, drawing his hand down her bottom. He clamped his fingers on her left cheek and spread it, pressing his digits to her bottom hole. “You were so sensitive here earlier,” he mused. “Could this be the key to your obedience?”

Tara tried to hide her reaction, the way every muscle low in her belly, bottom, and upper thighs contracted at his touch. Her anus was so sensitive. Even the lightest touch sent sensations shooting through her body. Kyren began to tap her there, relatively soft taps, but hard enough to make her jolt over his thigh.

“I can punish any part of you, pet,” he growled down at her. “There is no winning when you decide to fight me.” He pushed his finger harder against her bottom, making the ring of muscle give way. “I can take any part of you too.”

2017-03-19
Chris
Previous: The Sheriff’s Secret Baby by Ava Sinclair
Next: Examined and Corrected by Emily Tilton