The Alien’s Patient by Loki Renard 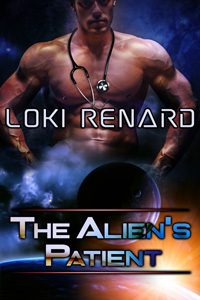 Twenty-four-year-old Faith Rockford has been fending for herself for as long as she can remember, but when she steals an extremely valuable piece of technology and attempts to sell it on the black market things go terribly wrong and she ends up barely escaping with her life.

Though it is against the laws of his world to interfere in the affairs of less developed planets, Serkan cannot bring himself to sit idly by while one of the humans he has been studying is in desperate need of help, so he rescues Faith and heals her injuries. But he is certain that the beautiful, feisty young woman will require extensive correction and training to teach her right from wrong, and he starts by baring her bottom and spanking her soundly for her recent theft.

The stern chastisement arouses Faith deeply, and after he brings her to a blushing climax over his knee she is left begging for Serkan to claim her hard and thoroughly. When he takes her in his arms, the handsome alien doctor’s masterful lovemaking proves more pleasurable than she could have ever imagined, and their lust for one another quickly blossoms into a passionate romance.

Once they reach his planet, however, the ruling council decrees that if Zerkan wants to keep his human then she must undergo a series of intimate, humiliating behavior modification treatments, and Faith soon finds herself naked and helplessly restrained as she is both pleasured and punished. But even when her ordeal is over, will this foreign world ever feel like home to her?

Publisher’s Note: The Alien’s Patient includes spankings and sexual scenes. If such material offends you, please don’t buy this book.

“I think I’m learning my lesson,” she grinned at Serkan. “And I think I could learn it again, and again…”

“Oh, yes?” Her alien doctor raised a brow at her and turned a dial. The vibration intensified immediately, making Faith wail with surprise as her pussy and bottom both began to hum in tune to the frequency Serkan had set.

“Oh, god! Serkan! Fuck!” The increased vibration was impossible to withstand without orgasm. It was not the sort of climax she was used to, one she had to work to reach. This was an orgasm that happened to her, was demanded from her, drawn from her quivering wet flesh.

Her plaintive cries lasted until he turned the vibration down, which he did not do for what felt like minutes. He kept her riding the wave of orgasm, sweat breaking out all over her suspended body as she was fucked by the medical machine, her mind blanking as pleasure rushed through her tender body over and over and over again.

When he finally lowered the setting, she was gasping and panting, every part of her body flushed.

He asked the question in husky, clinical tones as he reached out and pinched her straining nipples. Faith howled and bucked against her bonds.

“Fuck…!” She gasped and moaned as his hands added to the sensations her already worn-out body was experiencing. “Serkan… it’s…”

“Still learning your lesson, are you?” His smile was devastatingly handsome as he rubbed her breasts slowly then twisted the dials of the machine so she was elevated a little more. He reached underneath her body and she couldn’t see what he was doing, but she felt it when a small clamp was placed directly over the bud of her clit.

“That should help,” he said, dropping a light slap to her bottom as he turned the machine back to its infernal task of exhausting her erotically.

“Oh, god, Serkan!” Faith moaned as her clit began to vibrate along with the probes in her pussy and bottom. The clamp must have been designed to lightly grip the sensitive little bud, and provide a similar stimulation directly to that sensitive little bundle of nerves. It did its job perfectly. She writhed on the verge of yet another mandatory orgasm, her pussy juices slicking her thighs, her poor clit absolutely overloaded with sensation and yet still wanting more.

“This is a priming session,” Serkan explained as she hung limp against her bonds after an innumerable number of orgasms. “This is where your body and mind learn on a very basic level that you can be controlled, Faith. You can be taken. You can be fucked. You can be disciplined in every way possible, and there is no part of you which is not under my control.”

2017-05-22
Chris
Previous: Daddies Take Control by Kelly Dawson
Next: Claimed by the Omega by Kallista Dane