The Alien’s Rules by Maggie Carpenter 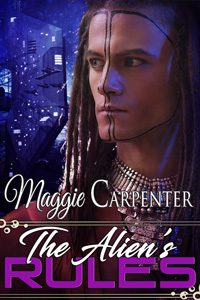 After several months of exceptionally vivid, wonderfully sexy dreams in which she is visited by a mysterious stranger who punishes and pleasures her as he sees fit, one night Ellie awakens to find herself in an unfamiliar place. She is lying naked on a table in an odd, purple-lit room, exposed and vulnerable, and the man who looms over her is devastatingly handsome yet definitely not human.

Introducing himself as Valodar, he gently explains that he is an alien from another world and he has been visiting Ellie in what he calls the dreamscape. Certain that she is the perfect woman for him and wanting her to experience life as his mate, he invites her to stay with him, but he makes it clear that she will have to submit to him completely.

Though his warning that she will be thoroughly spanked for any disobedience gives Ellie pause, Valodar’s mere presence leaves her yearning for his touch and she cannot resist accepting his offer. She quickly discovers that Valodar possesses unique physical traits, and he sends her tumbling into one shattering climax after another, claiming her more thoroughly than she would have ever thought possible.

But even as love begins to blossom between the dominant alien and the feisty human girl, their growing passion is interrupted when the Earth suddenly falls under threat from a cunning and ruthless alien race. Valodar insists that she must leave the matter in his hands, but can Ellie sit idly by while her world is in peril?

Publisher’s Note: The Alien’s Rules includes spankings and sexual scenes. If such material offends you, please don’t buy this book.

He smiled. He wouldn’t allow it of course, not yet, and he watched her face fall in disappointment as the intruder slipped out of her, returning to its home inside the sphere.

“I don’t like that word, come,” he said calmly. “You will not use it again. It’s a vulgar Earth term. You will use the word orgasm, climax, or refer to your moment. Repeat that, please.”

“I will not use the word come,” she panted. “I will use orgasm, climax, or moment.”

A sudden stinging lash crossed her backside. The gleaming globe had released a tentacle and whipped it over her bottom.

“That was not what I said. When I say repeat, I mean the entirety of what I said, and in addition, you didn’t begin as I have taught you.”

“Another lash for that error, then you will repeat the phrase.”

The tentacle whipped out, and as the hot sting sliced through her skin, she let out a loud yelp.

“Sir Valodar,” she said hastily. “I will not use the word come again. It’s a vulgar Earth term. I will use the word orgasm, climax, or refer to my moment.”

“Good. Now you have tasted a small sample of the punishment the sphere offers. Here’s another.”

Four wide strips peeled away from the globe, and like slithering hands, covered her cheeks and gripped her skin.

“You will soon feel a prickling, and it will become a sting, rather like the sting of a spanking hairbrush. I can go up to level ten, but I will send it only to level four, just so you can get a sense of it.”

He watched her writhe in her bondage, trying to escape the sharp pain. Unable to stamp her feet or bring down her arms, she squirmed lasciviously as she squealed out her ouches and ows.

2016-10-08
+admin
Previous: The Gunslinger’s Woman by Kelly Dawson
Next: The Marquess and the Millennial by Viola Ain