The Alpha’s Captive by Loki Renard 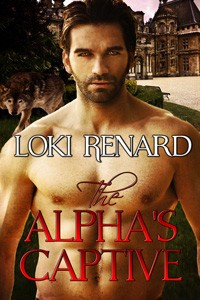 Hannah Wuster has always been fascinated by the mysterious diary left by her great, great aunt before she disappeared over a hundred years ago, and at the age of nineteen she sets out for the remote corner of England where her distant relative was last seen. Upon reaching her destination, Hannah is overwhelmed by the rugged beauty and primal power of the place, and before she knows it she has had way too many drinks in a village pub.

Lorcan Wallace has no patience for silly females out looking for adventure, and when a drunk American girl creates a disturbance in his local pub he takes matters into his own hands. Hannah is unceremoniously tossed over his shoulder and carried back to his nearby mansion to sleep off the alcohol before he teaches her a lesson she will never forget.

Upon waking up, Hannah faces first a stern scolding and then a painful, humiliating bare-bottom spanking from a darkly handsome giant of a man whose bold dominance sets her blood racing. The strict chastisement leaves her burning with desire, and after her punishment is over she surrenders herself willingly as Lorcan takes her long and hard.

Despite Lorcan’s warnings, however, it isn’t long before Hannah’s persistence in prying into the shadows of the past leads her to discover the truth about the man who punished and claimed her. Lorcan is not only a werewolf, he is the alpha of a pack, and now that she knows his secret he is left with no choice but to keep her as both his mate and his prisoner. Hannah cannot deny her body’s response to his savage lovemaking, but can she accept her new life as the alpha’s captive?

She let out a gasping sob as the spanking stopped for a moment, not knowing if it was a brief reprieve, or if Lorcan simply had some other torment in store for her.

He palmed her right cheek, his fingers settling low into the crevice of her ass, less than an inch away from her wet lower lips.

“Have you learned your lesson, whelp?”

Hannah blinked furiously to try to get the last of the tears out of her eyes. She knew he would be able to hear her tears in her voice if she could not stop crying.

“Good,” he said, his voice rough and tender at the same time. He slid his hand back and forth over her cheeks, rubbing across the center of her ass in a slow motion that soothed some of the sting away but also allowed the very tips of his fingers to brush lightly against her pussy. Hannah caught her breath and stayed very still, not knowing if he’d meant to touch her like that. It felt amazing, the brief strokes allowing her some pleasure in what was otherwise a painful interlude.

She should have hated him for spanking her, but instead she felt a closeness and an openness, which made very little sense to her. Instinctively her thighs spread a little wider and her hips rose a fraction of an inch. She was offering herself to him, though she could never have admitted as much. A part of her was responding to him without words, and without thought.

Hannah was rewarded when his hand slid from her hot bottom and she felt his fingers close over her bare pussy, cupping her gently. She let out a soft moan as his touch acknowledged what she could not—that being spanked, and spanked hard, had made her more aroused than anything that had ever come before it.

She could feel him gently massaging her between her thighs, a touch that was almost more comforting than sexual, though her pussy was slicking his palm and fingers and her arousal was growing by the moment. This was more than she had ever experienced with any man, and still it was not enough. Something had awakened inside her, something that made her even more reckless and even more full of primal desire than she had been when she first tasted the Rusty Shank’s beer.

Her hips began to rise and fall as she began to grind against his hand, shamelessly pleasuring herself against the same strong fingers that had first punished her. Lorcan slid his fingers up and for a moment she was deprived of his touch, but a moment later she felt the tip of his finger sliding along the center of her lips and pressing slowly inside the tight channel of her pussy.

Hannah let out a little moan as Lorcan pushed himself inside her. Just his finger, but the finger stretched her pussy and it made her walls clench around it and she finally knew what it was to have a man become part of her.

It was all happening so fast she was not sure what to make of any of it. Her body had taken the lead, her desire had taken over from sense and she wanted more, more of him.

2016-03-11
+admin
Previous: Hunted and Caught by Samantha Madisen
Next: Punished by the Admiral by Sue Lyndon