The Alpha’s Hunger by Renee Rose 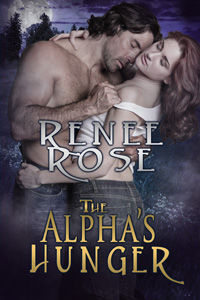 When she took a short rest on the floor of her cubicle while working late, the last thing Ashley Bell expected was to wake up with the company’s notoriously hard-assed owner and CEO, Ben Stone, standing over her. The offer of a ride home is a bigger surprise, but the biggest shock of all comes when Ben asks her to work for him as his personal assistant.

Despite some misgivings about his intentions, Ashley accepts the position, but she has barely started the job when a phone call turns her life on its head. Her twin sister has been kidnapped, and the price for her life is Ashley’s help in a secret plot to destroy Ben’s company. But she soon discovers that Ben has a far more terrifying secret of his own.

From the moment he first crossed paths with Ashley, the beautiful young human from marketing, Ben has been consumed by her. When her life is threatened by his enemies he casts aside caution and fights with the rage of a beast defending his mate. Not sure he can trust her, yet determined to protect her, Ben kidnaps Ashley, planning to keep her under his watch for as long as necessary.

Ashley is none too happy with the situation, but a hard bare-bottom spanking changes her attitude… and leaves her begging for more. Though Ben knows a human girl is no match for the fearsome lusts of an alpha wolf, she ignites in him a hunger he can barely contain. Can he resist the urge to mark her as his own and take her harder than she can imagine?

Publisher’s Note: The Alpha’s Hunger is a stand-alone novel which is the first book in the Alpha Doms series. It includes spankings and sexual scenes. If such material offends you, please don’t buy this book.

“Take off your clothes,” he said, putting the edge of command into his voice.

Her cheeks colored, but she began to undress almost immediately, unzipping the wrinkled skirt and letting it drop to a puddle at her feet. She pulled the t-shirt over her head, then opened the back clasp of her bra, her breasts springing free. They were perfectly shaped, round and lifted, pale with peach nipples, which jutted out in eager points. An angry bruise stood out over her sternum, where a bullet had hit her vest. He tensed at the sight of it, his body ready to shift and fight to protect her. But the mark underlined the need for this discussion.

His jeans became too tight in the crotch area. He kept his face impassive. “Panties, too,” he said, clearing his voice.

She hooked her thumbs in the waistband and lowered them over her thighs, bending to remove them.

When she straightened, fully naked, he suppressed a growl.

She slid her hands up and down her thighs, and then, as if suddenly aware of what she was doing, shook her hands out, but not before he caught the tremble in her fingers.

She took a few steps toward him, but stopped, out of reach. He smelled the metallic scent of fear, mingled with the heady perfume of her arousal.

“Ashley,” he said with a steely note of warning. “Come here.”

She swallowed but did not move, her eyes darting to the belt on the bed once more.

“I know you’re scared. Do you trust me to punish you?”

She caught his gaze, her blue eyes searching his. He knew she had no reason to trust him, but he held his breath for her answer.

She licked her lips and nodded, closing the distance between them.

The warmth of her trust spread through his body. Opening his knees, he grasped her hips and pulled her to stand between them. Her lips parted, her sternum rose and fell rapidly.

The conflict within him tore at his chest. His to protect. What if she cried? Would he be able to go on? He doubted it. He grit his teeth. Better to deal with this situation directly and have it over with. He pulled her face down over one knee and clamped his other leg over hers to keep her from kicking. Lifting his palm, he brought it down on one cheek, then the other. She gasped at first, but otherwise made no sound or protest. He spanked her with enough force to leave hand prints on her creamy flesh. She offered up her submission as easily as she’d given her whole self to him—placing herself in his hands with a trust he didn’t deserve.

He continued with the punishment, slapping her cheeks until they turned rosy.

She had begun to wriggle and make little cries with each loud smack, but she still hadn’t offered any resistance. As he paddled, her bottom bounced, cheeks flattening and springing back. Her pussy glistened between her legs, dewy with moisture. He wanted to stop spanking and drag his thumb over her glossy slit. He wanted to pleasure her with his fingers and his tongue.

But, no. Punishment first. And even if her body did respond to his dominance, that didn’t necessarily mean she would be in the mood after he had spanked her raw.

He stopped and ran his hand over her heated buttocks. He hadn’t expected her to take the spanking so well. He lifted her from his knees and stood with her, his body tight against hers.