The Alpha’s Pet by Loki Renard 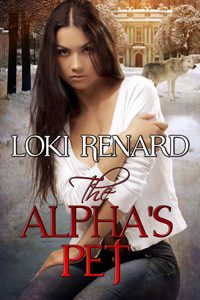 When troublemaker Sacha Wallace is banished after plotting against her brother, the alpha of one of England’s oldest packs, she’s deposited in front of the mansion of the powerful Russian alpha Alexei Chernov. Though she is both aroused and intimidated by the dominant wolf’s stern demeanor and formidable presence, Sacha does her best to be as difficult as possible.

Alexei has no qualms about stripping a troublesome female bare and punishing her thoroughly, and Sacha’s prideful defiance earns her one painful, embarrassing spanking after another. Determined to tame her, Alexei sets out to make Sacha his pet, and soon she is blushing crimson as she is taught to obey his every instruction, eat from his hand, and kneel at his feet wearing nothing but her collar.

Though submission does not come easily for Sacha, being made to bend to Alexei’s will excites her in a way nothing ever has before, and his masterful lovemaking sets her blood on fire. But when Sacha’s presence leads to turmoil within the pack, will Alexei cast her out or claim her irrevocably as his mate?

“You will speak with respect,” he intoned. “You will obey the orders given to you by myself, Vladimir, and any other ranking pack member. You will learn the ways of our home and our family and you will be punished severely if you transgress. Do you understand?”

Yes. The word was in her head, but her pride would not allow it to come from her lips. Though she was scared, she remained silent as the alpha’s eyes bored into hers.

The order was curt and blunt. She did not obey it. One second stretched into two and three and still she had not made any utterance either than the guttural sounds of a woman caught in a compromising position.

The tension on her hair lapsed as Alexei sat down on a nearby couch, but the grip was soon used again to haul her over his lap. She landed over hard, muscular thighs, her naked body sliding across his legs until arrested by his other arm, which coiled about her waist. Without another word, he started spanking her bottom, his palm landing with loud gunshot-like slaps that echoed through the room.

Staring down at a rich carpet, Sacha’s mouth opened in a silent scream. As an onlooker, spankings had never seemed all that painful. She had thought that those who complained and whined were soft, spoiled little brats. But now it was her own bottom being belabored she was shocked at how the spanking heated her skin immediately. Within half a dozen swats she was feeling an uncomfortable burn that spread across the surface of her cheeks at the speed of the spanking, stinging and aching and sending her senses into overdrive.

As well as the physical sensations, Sacha realized she had completely underestimated the emotional reaction. Held over Alexei’s lap, she found herself locked in an undeniably intimate position. Her naked body was pressed hard against his well-made clothes and she was glad for the barrier of cloth, though it provided little in the way of modesty really. Hot embarrassment flushed her skin as her legs began to kick and the hard bud of her clit rubbed against the smooth fabric of Alexei’s trousers.

Arousal was not far away, though she fought it with everything she had. If she were to become visibly wet, that would be the end of it for her. She would have no pride left at all. Sacha silently cursed herself. Taken like this, held so close to his powerful body, feeling the disparity between their size and strength, she could no longer hold onto the idea that she could somehow best him physically. He held her in place as if she weighed nothing at all, her struggles rendered void by the musculature of his arm.

2016-06-18
+admin
Previous: Their Dirty Little Secrets by Shelly Douglas
Next: Claimed on the Frontier by Jane Henry