The Alpha’s Promise by Renee Rose 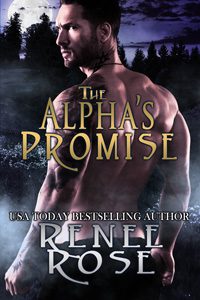 After one loser boyfriend too many, Melissa Bell swore she was done with bad boys, but when her ex puts her life in danger it is a buff, tattooed, dirty-talking alpha shifter who shows up to save her. More disturbing still, her rescuer makes it clear that he regards Melissa’s safety as his personal responsibly, and defying his instructions soon earns her a painful, embarrassing spanking. Though the punishment is humiliating enough on its own, however, it is her body’s reaction to the tough, handsome wolf’s stern dominance that truly leaves her blushing.

It doesn’t take long for Cody to find himself wishing he’d never made an alpha’s promise to protect Melissa, yet for some reason he can barely control himself around her. His inner wolf craves the beautiful human in spite of her snobbish attitude and constant sass, and when she is writhing over his knee with her bright red, well-spanked bare bottom on display it is all he can do not to mark her and mate her right then and there.

Each moment he spends with the alluring, feisty girl only increases his hunger for her, but Cody promised himself long ago that he would never take a human as his mate. Will his pride push Melissa away forever, just when he realizes he can’t live without her?

Publisher’s Note: The Alpha’s Promise is a stand-alone sequel to The Alpha’s Hunger. It includes spankings and sexual scenes. If such material offends you, please don’t buy this book.

His cock strained at the sight of her naked ass, roaring to life, ready to sink between those beautiful thighs and never stop moving. But this was punishment. The weight of it had forced him to shift out of his dirty-talking bad boy predator self and into something new. For the first time, he felt some of the responsibility of being a leader—the responsibility his father had always complained he lacked.

Bracing himself against the pain of inflicting this punishment, he lifted his palm and let it fall. It landed with a crack on her right cheek.

She jerked, but didn’t make a sound.

He repeated it on the left.

Already, red fingerprints bloomed on the first side. She’d be rosy red and throbbing by the time he finished and despite the way he’d threatened her earlier, he doubt she’d be turned on in the slightest. If he planned to make an impression on her, he couldn’t make this fun.

He started with light slaps, letting both of them settle into the spanking, wanting to get a sense of how much she could take. He needed to be careful not to use his shifter strength on her.

She wriggled and gasped, but otherwise accepted the warm-up. Of course, she didn’t know it was just a warm-up.

He concentrated his aim on the lower half of her buttocks, where she sat, sometimes swatting the backs of her thighs, which made her squeal.

“When I tell you to stay put, you stay put,” he growled, increasing the intensity of the spanks, his hand crashing down in a swift volley of spanks.

She jerked hard against his restraint, kicking her legs out to the side. “Ow! Okay, okay!”

He hooked one leg over hers to keep her in position.

“I said okay,” she squealed when he continued to spank her.

“You are not directing this punishment, princess.”

He sensed her rising panic as he continued to spank her hard and fast, her delicious ass bouncing under his punishing blows.

“I’m just getting started, baby girl. I won’t be stopping until your ass is on fire and you’re swearing up and down you’ll never disobey me again.”