The Alpha’s Punishment by Renee Rose 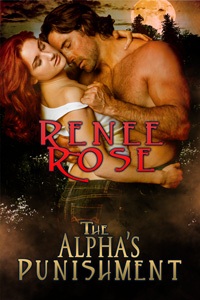 It started with a small deception… Now, five long months later, Ashley’s alpha shifter fiancé still thinks they’ve been trying to conceive a baby when she’s secretly been taking the pill the whole time. When he finds out, there’s going to be hell to pay, and that means a thorough, humiliating punishment and a bottom which will soon be sore both inside and out.

“Bend over and grab your ankles,” he said, tugging her hips backward to give her room to fold.

She swallowed, her mouth dry.

He waited for her to comply, watching her slowly bending at the waist and reaching toward the floor. The stretching of her ass only made the throbbing worse. He pressed something slick and cool against her anus and she jerked, trying to clamp her cheeks closed. The position kept her spread to him, though, and he pushed more insistently, until she relaxed and allowed it in.

“You may stand up now,” he said, wiggling the object inside her. Turning her hips, he used the intrusive object to propel her forward, until she reached the arm of the sofa. “Bend over,” he said, pressing her torso down. “This is ginger,” he said. “You’re going to keep it in for the remainder of your spanking. I’m going to make sure your bottom burns on the outside and in,” he said.

She tried to erect herself, craning her neck around to look, but Ben pushed her back down and held her in place.

“If you’re a good girl, I will finish this spanking with my hand,” he said. “That means no reaching and no kicking. If you’re naughty, I will take off my belt and spank you until you scream. Understand?”

Her heart thundered in her chest. “Yes, sir,” she whispered, her pussy clenching despite her fear.

His fist wrapped in her hair and he tugged her head back. “You like it when I punish you,” he growled in her ear, probably smelling the scent of her arousal.

Her nipples hardened. The roughness in his voice gave away his desire for her. Her wolf had returned from whatever cold place he’d retreated.

He pulled her hair back again. “Yes, you do.”

“I don’t like disappointing you.” That was all true.

His teeth closed lightly on her shoulder, then released—a love bite.

She became aware of a burning from the ginger and she moaned. “It burns.”

He released her hair and pushed her back down. “It’s supposed to burn. I’m teaching you a lesson, little girl. Do you lie to me?”

“No, sir,” she said, gulping as he began to spank her again, just as hard as he had before. This time, her ass was already sore and now her anus burned as well. She tightened around it, which only made it worse.

Ben spanked and spanked, merciless in his punishment as she lay helplessly sprawled over the arm of the sofa with a stick of ginger in her ass. Her entire body grew hot from the root, and she began to sweat. Her pussy swelled between her legs, heating along with her entire pelvis, arousal dripping down her legs.

“Oh, it burns… it burns,” she moaned. Every time she shifted or squeezed, she incited a fresh bloom of agony from the ginger root. That, combined with the pain of his seemingly endless spanking seemed more than she could bear. “Ben,” she whimpered. “I’m sorry. I’m so sorry. I’ll be a good girl,” she pleaded. “I’ll never lie again. Please don’t spank me, please don’t—”

“Shh.” The spanking stopped. Ben slid a finger between her legs, over her glossy slit.

“Please take it out,” she begged.

2015-05-10
+admin
Previous: The Alpha’s Hunger by Renee Rose
Next: Owning His Bride by Sue Lyndon