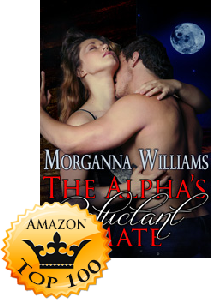 ★★★★★ The Sterling Fig Book Reviews @ Amazon.com “5-figs for The Alpha’s Reluctant Mate! Morganna Williams delivers a HOT shifter-filled fun read!” on October 9, 2015
5-fig review! I had the privilege of reviewing this story while it was still in the pre-release state and of all my MW books, this one is my favorite. It had humor, best friends, one fired up heroine, one overprotective Alpha, a huge were campus, a were-war!, and did I mention spanking? Of course there is spanking! It wouldn’t be a Morganna Williams’ story without it. I loved the character development and the pace of the book. It kept my attention the entire way through.

Alexandra (Xandie) wakes up in a hospital with her best friend Epenie mourning her. Xandie was presumed dead after a large animal attack. Almost immediately her behavior changes — her appetite increases, her sense of hearing and smell heightens and it isn’t long before Epenie comes to the conclusion that her best friend is a werewolf! The hi-jinks ensue when Alexandra is essentially wolf-napped by Connor, the Alpha of a local pack. A war is ensuing and Alexandra is the bait to lure the Alpha to his death.

The battle of wills between Alexandra and Connor is awesome and I loved the sub characters and can’t wait to hear their stories.

If you don’t like dominate males, evil rouge wolves, overprotective besties, yippy little dogs or hot spankings this might not be your cup of tea. But otherwise — check out all of Morganna’s books and take an escape for a few hours! I give this book 5-figs. xo

★★★★★ Katherine Deane @ Amazon.com “fast paced, humorous, sexy– everything a paranormal should be!” on October 15, 2015
I am a huge paranormal fan– it’s what I always go back to when I want to recharge.

I’ll admit, I knew next to nothing about this book going in– just that it was paranormal, and had a super sexy cover.
I did have some expectations, though.

This was just like some of my favorite pnr’s! The paranormal setting was not an afterthought–it was the focus!

It started off with the funny wit and humor that I love. (…Xandie making several doctors and nurses faint by saying “Boo” to them, after they thought she was dead. Hehe, she had had a bad day 😉 )

There was a great initial “connection” between the two main characters, Connor and Xandie, giving them time to get to know each other throughout the book. I liked that the mating and relationship wasn’t forced.

The fight scenes were awesome and gruesome , with lots of lovely blood and carnage. My favorite thing about pnr’s. I wouldn’t have minded a bit more fighting, but overall, it was still really good.

The secondary characters all had great side stories, and I really hope there will be sequels so each of them can get their own story.

I loved everything about this story.
It was fast paced, humorous, sexy, with a very engaging plot and lovable characters.

If you like paranormal romance, you will really enjoy this one!

★★★★★ Summer Graystone @ Amazon.com “Hot Sexy Wolves!!” on October 10, 2015
The Alpha’s Reluctant Mate jeeze even the title just makes you want to read the book… and this book totally lives up to its name. I never know really how to start my reviews without just saying this book is amazing well it really was! There was so much to this story that I swear it could have been a movie. Ms. Williams has created this world of vampires and werewolves where they live in somewhat peace and harmony with each other and it is just amazing to read! I LOVE the adventure and the details! I love how there is a puppy and it actually has an impressive role in the story! I love the connection between everyone and how the bonds begin to form! This is not quite a standard paranormal story and yet I could totally feel the many alpha wolves coming alive in my head. Ms Williams has mastered the sexyness of the wolves and I can’t wait to read more!

★★★★★ Heather Root “Awesome book!” on October 9, 2015
I could not put this book down, I had to read from start to finish. I just had to k ow what was going to happen between Xandie and Connor and the other characters. It is one of her best books yet! Awesome, Awesome, Awesome.