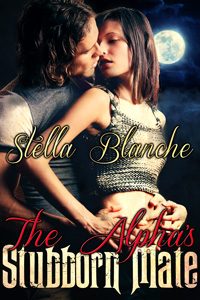 When her hometown is rapidly and unexpectedly taken over by a mysterious, powerful group of strangers, Sydney isn’t sure how to react. But after the huge, breathtakingly handsome man who is clearly in charge threatens to spank her if she dares to disobey, it isn’t long before she puts his warning to the test and promptly ends up with her cheeks blushing and her bare bottom burning.

As an alpha shifter, Alexander recognizes his future mate immediately, and when the beautiful, feisty little human defies him he doesn’t hesitate to correct her firmly. But after Sydney is accosted by members of a rival pack, Alexander decides it is time to properly make her his.

After an intimate, humiliating examination, a thorough, shameful cleansing, and a stern, painful reminder of Alexander’s dominance, Sydney is claimed in every way. Once the ceremony is complete, she quickly discovers that not only can her new mate sense even her most private thoughts, he can also master her body as completely with pleasure as he can with punishment. But when Alexander’s enemies seek to use her to get to him, will Sydney’s life be put at risk?

She swirled around at the sound of that deep and sinfully sexy voice.

“You!” Without thinking she marched up to Alexander and slapped him right in the face. Hard, so hard that an angry red imprint was left on his cheek immediately and the palm of her hand was burning. She opened her mouth to give him a piece of her mind, but before a single sound could stumble past her lips, she was dragged forward and bent over the admin lady’s desk—which was thankfully unoccupied at the moment. The whole front office was deserted as it was after school hours already. Thank god for small mercies.

“What the hell do you think you’re doing?” She wanted her voice to sound firm, but it came out as a strangled, breathless whisper. Her humiliation at the sound of her voice only increased as Alex lifted her dress up and pulled down her panties.

“Excuse…” The door behind them opened and Sydney struggled in an attempt to get up from the table and cover her naked backside as Jason came out of his office.

“Alpha?” Sydney’s struggles were in vain as Alex used one hand to keep her down. She couldn’t see Jason’s face from the angle she was positioned in, but some silent conversation had to have taken place as Jason calmly walked over to the front door of the office and closed it before she heard the lock clicking.

“What the fuck do you think you’re doing?” Sydney demanded, followed shortly by an angry growl from behind her and Sydney whimpered at the animalistic sound before gasping as Jason took a hold of her wrists and pulled them straight in front of her, keeping her firmly in place. Before she could protest anymore a loud smack resonated through the room.

She gasped in shock and pain as it registered that Alex had just spanked her. His hand, large enough to strike a large surface across both her cheeks, came raining down on her pale skin, turning it a bright pink. Sydney bit down on her lip to keep from crying out when the truth was that she was wailing inside. Alex hit the same spot every time and the slight burn was turning into a raging fire.

To her utter, further embarrassment, the fire was spreading from her ass straight to her core, causing juices to coat her pussy lips. She clenched her legs together in the hope of hiding her arousal when suddenly she could feel Alex stiffen behind her. She dared to glance over her shoulder at him. His eyes were focused solely on her, taking a deep breath through his nose before his eyes turned pitch black. Jason let go of her wrists and she was faintly aware of him leaving the office without saying a word.

Sydney stood up on shaky legs and turned to face Alexander. It felt like her knees would buckle and give in at any moment and despite the degrading fact that her panties were still around her ankles, she raised her chin proudly and gave him the best glare she could muster despite the tears gathering at the corners of her eyes. She took a deep breath to steady her nerves as she bent over to pull up her panties.

“Leave them.” His voice was a deep timbre and had her core clenching.

She didn’t listen to him and pulled her panties up with shaking hands.

“I think the extent of my humiliation has been reached for one day. Thank you, Mr. Moore.” She turned to walk away but a gentle hand on her arm stopped her.

“Sydney, I am not finished yet.”

2018-08-24
Chris
Previous: Tamed by Them Both by Rose St. Andrews
Next: Owned by the Highlanders by Lily Harlem