The Art of Discipline: Dani’s Discovery, The Mockingbird Chronicles, Book One by Stardawn Cabot and Alexandra James 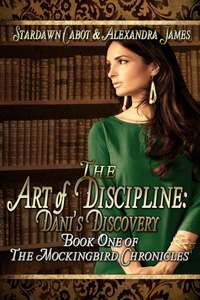 Yet another tragic event befalls Danielle Ryan, and she is forced to return to her uncle’s bookstore upon his sudden death. Uncle Sean was her only living relative and now that he’s gone, she has been left truly alone. While settling his affairs, however, she is unprepared for the life-altering experience she encounters when she finds her match in her uncle’s store manager, Emma Gray. Emma invades Dani’s life in surprising and unexpected ways, bringing not only discipline, but love—two things that Dani desperately needs.

All is not perfect, though, and fate hands them another twist when Emma’s biological father gets into the mix, catching both Emma and Dani off guard and threatening to end their happiness. Afraid that their newly created bond will be shattered, they have to buckle down or risk losing everything.

Fighting to keep each other safe, Emma and Dani learn not only how to work together, but more about each other and the blossoming love that has formed between them as well. Throughout it all, Emma continues to broaden Dani’s horizons, opening her eyes to just how much she’s been neglecting herself and helping her to discover trust, domestic discipline, and what it really means to be family. Will their newly found relationship and trust in each other be enough, or will Dani give up and run all the way back to Chicago?

Publisher’s Note:
The Art of Discipline: Dani’s Discovery includes spankings and sexual scenes. If such material offends you, please don’t buy this book.

“I want you to remember, Danielle, that every time I promise to spank you, I will,” Emma lectured before raising her hand and bringing it sharply down on Dani’s upturned bottom.

A slow and steady stream of swats followed as Emma used her hand to begin to make her point. She alternated sides with each swat yet tried to make the strikes random enough to keep Dani focused.

It didn’t take long before Dani started to react. She’s tried to stay tough at first, but the building heat was causing her to squirm and gasp as it continued to grow.

Emma continued just long enough to notice a rosy pink color peeking out from under Dani’s panties. Deciding it was time for the hairbrush, she picked it up and rubbed it across Dani’s bottom. Feeling Dani tense with the changing sensation, Emma asked, “Now, tell me again why we are here, Danielle?”

Shaking her head, Emma set the brush down, removed Dani’s panties with a flourish, and resumed spanking her now bare backside with her hand. It took less than a dozen swats before Dani’s resolve melted and she was unable to stay still. “Let’s try this again. Why are you here, Danielle?”

“Because I took money from the drawer instead of petty cash and had Will do my errands, and because I disobeyed you about coming into work today,” Dani gasped.

“Very good,” Emma responded. She rubbed Dani’s backside gently before picking up the hairbrush once again. “Let’s drive the lesson home now, shall we?”

As the first crack of the hairbrush bit into Dani’s already sore bottom, she quickly began to squeal and squirm in an attempt to avoid the deadly strikes. Her attempts, though, were futile, as she was unable to go anywhere, for despite her small size, Emma had a vice grip around her waist.

When Dani began to cry, Emma lightened up the swats. She wasn’t going to stop this lesson yet, but she was taking her cues from Dani. Finally feeling Dani go limp over her lap, Emma realized it was time to finish the spanking. Her strokes once again sped up, and with an added strength, she delivered the last ten to Dani’s sit spot, effective creating a lovely crimson color.

Throwing the brush down, she gently rubbed Dani’s red backside gently. “It’s all over, Dani,” she said quietly.

After a few moments, Dani was able to stop the frantic sobs and reduce her cries to quiet sniffles. Only then did Emma help Dani up and pull her to sit gingerly in her lap. Underwear forgotten, Dani also forgot all the hate and anger she had for Emma, for in that instant she needed to be held more than anything. Laying her head on Emma’s shoulder, Dani sniffled as Emma comforted her.

2013-12-11
+admin
Previous: Taught to Serve by Jaye Peaches
Next: Claimed by the Beast by Natasha Knight