The Barbarian’s Pet by Loki Renard 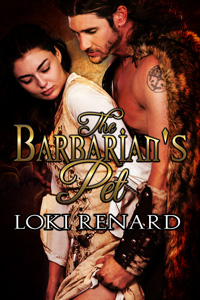 aptured, stripped bare, and brought before the barbarian king whose men she had the audacity to resist, eighteen-year-old Sariah can only assume she will be made his slave. But her conqueror has other plans for his beautiful, spirited captive, and Sariah will be much more than an ordinary slave. She will be his pet, trained to come when he calls, heed his every command, and please him in any way he demands.

Sariah does her best to remain proud and defiant, but the handsome, dominant warrior proves quite adept at teaching his pet obedience by means of his firm hand applied to her bare bottom. When she persists in her rebelliousness, Sariah quickly discovers that a mere spanking is far from the most humiliating punishment a naughty pet can face, and before long she has been fitted with a tail and put on display for the king and his men.

To her surprise, however, in spite of her circumstances Sariah soon finds herself craving her new master’s touch, and when he claims her fully his skillful lovemaking brings her pleasure beyond anything she has felt before. But can she ever hope to find lasting happiness in the arms of the man who has made her his pet?

“Face down, Sariah, bottom up, cheeks spread,” he repeated the order in clipped tones. The usual warmth in his eyes was gone, replaced with hard command. She fancied she now knew what it was like to be a warrior called before his displeased king. Griffen’s regal bearing was all the more evident now with his arms folded across his broad chest, the ginger tail held firmly between thumb and forefinger. It looked small in his hand, but she knew it would not feel small in her bottom.

The moment drew out as she realized that there was no choice but to obey. Slowly, Sariah turned over onto her stomach and put her hands back to cup her cheeks. It was almost too much to spread them and allow him to see her anus, but she did it.

“Good,” Griffen praised. “You see, you are capable of obedience. The question is, are you only capable when I am standing over you with lash in hand?”

Sariah’s hands left her bottom to grasp at the furs. Griffen let the slip in obedience pass unremarked upon as the pad of his thumb rubbed at her bottom hole, pressing against the tight little aperture gently to ease it open enough for his digit to slide in.

She gasped, surprised as ever by how it felt to have her rear taken by the king. His thumb slid into her bottom, the oil and the heat of her rear making for a smooth entry that was not at all painful. His other fingers drifted over the lips of her mound, gently stroking her with a touch that was both arousing and soothing. Even though he was punishing her, Griffen’s tenderness was obvious.

Just when Sariah was thinking he was going to do nothing but pleasure her bottom, he began pressing the root plug into her rear. At first the small nub felt fairly innocuous, but the deeper it went, the more she was aware of a slow heat beginning to spread inside her bottom.

She let out a little whine and squirmed, but that only made the heat spike higher. Her anus spread for the plug, which grew wider and wider as he pressed it deeper, until finally it slid into position, the flared base keeping the leather strips of the tail outside her body, the ginger inside.

Hotter and hotter the sensation grew, the ginger working its dark magic inside her tight ass, heating her sensitive insides with a sting that became more intense for every moment it stayed in place. Sariah whimpered, but Griffen kept his hand in place, making it impossible for her to push the plug out.

“Settle, pet,” he growled in her ear. “This heat is nothing compared to what it will feel like when my lash heats your rear.”

2015-12-12
+admin
Previous: Her Doctor in Charge by Maggie Carpenter
Next: His Lordship’s Mate by Jaye Peaches