The Billionaire and the Wedding Planner by Emily Tilton 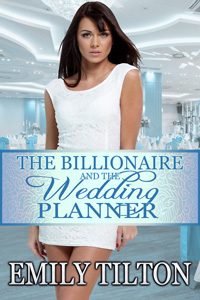 With the wedding of his nineteen-year-old stepdaughter Emily fast approaching, billionaire Jason Garrons would like nothing more than for the event to bring the family together after the tragic death of Emily’s mother, but constant bickering between Emily and her sister seems set to ruin any chance of that. On top of everything else, the wedding planner is getting on Jason’s last nerve.

Though she jumped at the chance to plan a high-society wedding, when Maria Sali pushes Jason too far she is shocked by his reaction. After making it clear that he is done putting up with her sharp tongue and headstrong attitude, he bares her bottom and spanks her soundly in her own office. To Maria’s surprise, the humiliating punishment leaves her deeply aroused, and she soon finds herself imagining what it would be like to be more thoroughly taken in hand by a man like Jason.

Maria is not the only young lady in need of stern correction, however, and when Emily gets drunk and causes a scene at the bridal shower her fiancé decides that it is time for her to learn how a firm-handed husband deals with a naughty bride. But when the moment for Emily to walk down the aisle finally arrives, will everything go smoothly or will it all end in tears?

Publisher’s Note: The Billionaire and the Wedding Planner includes spankings and sexual scenes. If such material offends you, please don’t buy this book.

“This isn’t about your competence, Maria. It’s about your apparent tendency to insubordination. Now take your spanking and show me you can be a good girl when I need you to be.”

The words good girl had an electric effect on Maria, as Jason had thought they might. Her eyes went very wide. Then she shook her head slowly. “I… I can’t…”

“You can,” Jason said, and he stepped forward, to cover the yard between them slowly but purposefully, and to take gentle hold of Maria’s upper arm. She shivered, but she didn’t pull away, and he turned her and began to march her into her office, where her tidy desk waited.

She hesitated once, when they had almost reached the desk, and turned away, shaking her head. “Please,” she murmured, but Jason could tell that Maria herself didn’t really know at what her plea directed itself.

He overcame this bit of resistance, pulling her along and saying, “We’ll get this over with quickly. Bend over, with your elbows on the desk. I’m going to pull up your skirt now.”

The conflict he had heard in her earlier please seemed greatly magnified now, but again Jason heard a fundamental note of acquiescence and acceptance. Without using a great deal of force, he urged her forward and bent her down with his left hand, while with his right he reached down for the hem of her businesslike gray skirt.

Instead of resisting, she gave a little sob deep in her throat, letting her weight rest on her elbows just as Jason had told her to do. Then he saw why: Maria Sali was wearing lingerie so sexy it made his cock swell and his heart race.

Her trim, heart-shaped bottom was clad in a red lace thong that among other things (including letting Jason see just how unbelievable an ass she had) afforded her no protection from his spanking hand. She had a red garter belt on, too, holding up ivory nylons.

Jason restrained his desire to ask why she had worn such things to the office today. For a moment, he speculated on whether it had anything to do with her meeting with him, but decided it must be for a date she had later. Lucky guy, he thought a little wistfully. He also restrained the urge to say something about the naughtiness exhibited in the wearing of such undergarments.

Instead he rolled up the skirt, noting with some relief that Maria kept her legs close together, and said, “I realize this is old-fashioned and even sexist of me, Maria, but it’s something I believe can be helpful in the proper situation.” Then, with his left hand atop her waist to keep her in place, he started to spank her distractingly pretty bottom.

He wished he had a hairbrush, frankly, both because for a disciplinary spanking he thought an implement always conveyed a helpful sense of authority and because he wouldn’t have had to worry quite so much about the sensual aspect of the punishment. He could certainly deliver a firm lesson with his hand, though, and he did, spanking hard and at a regular pace that kept Maria yelping, her head low and her face turned away so that Jason couldn’t see her expression despite the rather severe style in which she kept her obviously long, lustrous hair.

She squirmed a little, and kicked a very little, but he held her fast and kept smacking her right, left, center, the same way he would have if he had had a hairbrush, until her cries at the repeated visits to her already sore bottom-cheeks grew loud and, in Jason’s judgment, completely authentic.

2017-08-20
Chris
Previous: Sentenced to a Punishment Examination by Carole Archer
Next: His Untamed Mate by Korey Mae Johnson