The Billionaire’s Pet by Loki Renard 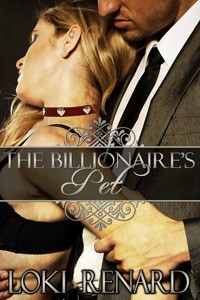 As far as twenty-seven-year old Ellie Jones is concerned, she is not only the youngest CEO in her company’s history, she’s also the best. So when Daniel Treville—one of the richest men in America—purchases the company and wants to lead it in a new direction, Ellie is not about to give up power without a fight.

Daniel is not a man to be trifled with, however, and when she defies him Ellie quickly finds herself pulled over the handsome billionaire’s knee for a painful, humiliating bare-bottom spanking. Yet despite her outrage and embarrassment, Daniel’s firm chastisement leaves her unbelievably aroused, and when he takes her long and hard on her own desk it is by far the hottest thing she has ever experienced.

But Daniel has much more than just a good, hard spanking planned for Ellie. He has it in mind to own not just her company, but her as well. She will remain CEO, but she will also have a new role as his sexy, submissive pet, and soon enough Ellie finds herself naked except for a tail in her bright red, well-spanked bottom, being taught to please her new master properly.

Though she cannot deny the fact that Daniel’s dominance sets her ablaze with desire, Ellie still has a thing or two up her sleeve, and he will have to work hard to keep her in line. But when she takes her defiance too far and ends up in over her head, will she end up losing Daniel forever?

“Daniel, please,” she whined as a fierce blush consumed her prone body. “A tail? I get the message already, really I do.”

“You haven’t begun to get the message, kitten,” he said calmly. “Now reach back and spread your cheeks for me.”

Ellie turned her head to stare up at him with pleading dismay. Was he really going to make her spread herself for this toy that carried so much significance?

A sharp tap landed on her left cheek. “What did I tell you to call me, pet?”

“Sir,” she ground out between gritted teeth. “Please… don’t…”

She very much doubted that.

“These are the terms of our arrangement, pet,” he reminded her gently. “Now reach back, spread those pretty pink cheeks, and ask me nicely for your tail.”

“I am not going to ask you to put that in my…” She shied away from saying the word, too embarrassed.

“Yes, you are,” he said in soft, cajoling tones. “You’re going to spread your bottom cheeks nice and wide and you’re going to ask your master to please slide your tail into your tight little anus.”

Ellie had heard of looks that could almost kill, but his words damn near turned her inside out. She felt a light sheen of sweat appear on her body almost instantly as his words sank into her psyche.

“Do I need to spank you again, kitten?”

“No!” Blushing more furiously than she ever had in her life, Ellie tentatively reached back, took hold of her hot-to-the-touch cheeks, and pulled them away from each other, exposing not just her cunt, but the tight bottom hole he intended to invade with her help.

“Very good, kitten.” His words were like a liquid caress, soothing some of her humiliation. She could hear the warmth in his tone. He sounded quite different when he was pleased with her; his timbre was deeper and his affection was almost palpable. “Now ask me for your tail.”

2016-01-16
+admin
Previous: His Captive Mate by Samantha Madisen
Next: Taken by the Admiral by Sue Lyndon