The Borrowed Bride by Jaye Peaches 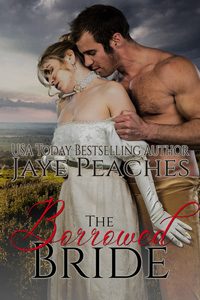 Pressured by her family to wed a wealthy gentleman who doesn’t love her, eighteen-year-old Dara grows increasingly upset and confused by her husband’s refusal to consummate the marriage, and when he announces that he will be travelling abroad for three months she decides it is time for her to seek out her own happiness, starting with an extended visit to London.

Dara’s plan soon goes horribly awry, however, when she tumbles from her horse during a storm and is forced to seek refuge in a farmhouse. Her stern, handsome host wastes no time in stripping Dara of her wet clothing and wrapping her in a blanket, and before the night is over he has claimed her in a rough, demanding, intensely pleasurable way that leaves her longing to be his.

Her dishonesty about her situation earns Dara a painful, humiliating spanking the next morning, and over the coming weeks she learns what it means to be thoroughly and shamefully mastered. Though every moment she spends away from her husband’s estate risks a scandal, when it comes to light that he has a secret lover of his own perhaps an arrangement can be agreed upon…

Publisher’s Note: The Borrowed Bride includes spankings and sexual scenes. If such material offends you, please don’t buy this book.

She stared at his mammoth thighs and the girth of his upright cock. “I can’t.”

She took it and hooked one of her legs over his broad lap. He ringed her waist and lifted her bodily, until her legs were positioned either side of the chair. Then, without letting go, he lowered her. The head of his cock pushed aside her slippery folds with ease. She was poised and nervous. He possessed a strength that might cower her, but she realised she could put good use to that sturdy frame. She pressed her hands down onto his thickset shoulders and balanced herself, uncertain whether she should sink or rise above him. He squeezed her hips and shifted his knees upward. With ease he entered her, and with a further jerk of his hips, she was impaled successfully.

She gasped, feeling the stretch, the forced opening. He pinned her down, requiring her to stretch and give until the full measure of his cock was embraced by her taut tunnel. There was no room for escape for her, but neither for him, unless he threw her off.

“I feel it in my belly,” she stammered.

He relaxed his grip. “I feel wet cunt.” He cocked his head to one side. “Your eyes are watering.” It was an observation, not a question or a reason to stop. “Ride me.”

“How?” She was stuck upon his lap.

He cupped his hands under her bottom and lifted her up as if she was as light as a feather. “Like this.” He lifted her, and she came close to losing him, then once more she was thrust down. She understood that vigour was required.

She arched her back and rose onto tiptoes. The movement was delicious, frictionless and breath-taking. Gaining momentum, she did not need his guiding hands or support. Using the full span of his hands, he caressed her back from tailbone to nape, down her chest and under her breasts. A broad grin struck his face.

Dara was on the cusp of a climax when he tweaked one of her nipples between his finger and thumb. She winced, clenched her quim, and tossed her head back.

“You played with me. Now I play with you,” he said pleasantly.

As she bucked and ground her hips into his pelvis, he teased and tickled her breasts. He used his hands, his lips and tongue; he kissed and sucked, fluttered or rolled his tongue around each nipple in turn. He kneaded with his hands, trapping her breasts as she bounced. Throughout, she had to keep going, because if she slowed, he nudged her with a gleeful reminder by using his teeth. When the sharp stings transformed into a subtle caresses, she moaned. Her legs were weakening, her muscles cramping. She cried out in frustration. She did not want to stop, but she could not keep going.

“I’ll help you,” he said soothingly. Once again, he had her arse cheeks cupped in his palms and with that wonderful ease of strength, he propelled her up and down.

Her hair flew in all directions, catching his face. She scraped her nails down his bare chest and arms, clawing at him, oblivious to the crushing grip of his hands. The throes of crippling pleasure were joined with joyous pain. The climax, which he masterfully engineered from the moment she had straddled his thighs, was designed to herald what he planned for her next.

He lifted her off his cock, twisted her around, and brought her down onto the sheepskin rug at his feet. She landed, without discomfort, on all fours. He immediately penetrated her from behind on bended knees, driving his weight into her. What prevented her from flying forward was a firm grip on her shoulders. Below, her breasts swung in tandem to his thrusts. She came again instantly and grasped at the fleecy tufts. Now she knew the true purpose of the rug—to cushion her knees.

The quaking erupted throughout her body, each tiny contraction of a tender muscle joined to another, and on, until she was rippling from calf to arms. The tension dissolved in conjunction with the waning orgasm. In its place, she felt only bliss and because she was neither rigid nor soft in her flesh, she simply yielded to his thrusts, the steady pounding of his hips against her bottom.