The Captain’s Lady by Chula Stone 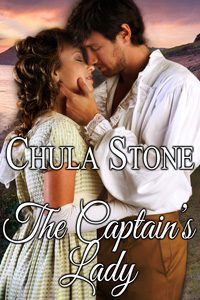 After her father passes away, twenty-two-year-old Grace Marplesdon finds herself in a predicament. He has left her an inheritance in the form of a hunting lodge, but his will states that the lodge must serve as her dowry and she has no interest in finding a husband.

To resolve the situation, her good friend Captain Roderick Weaver suggests a marriage in name only. This arrangement will leave him free to spend as much time as he likes at sea while allowing Grace to follow her dream of turning the lodge into a home for orphans. Though he will not claim his marital rights, Roderick makes it clear that he will still expect Grace to be an obedient wife and he will not hesitate to correct her behavior when he feels it necessary.

Though Grace accepts his proposal, as the months pass Roderick finds his desire for his wife growing stronger every day, and when she speaks rudely to him after he returns home from a long voyage he decides it is time to take her in hand. He bares her bottom and spanks her soundly, leaving Grace with no doubt that their relationship will be different from now on.

Despite her reluctance to become attached to a man who must spend so much time at sea, Grace cannot help falling in love with her handsome, firm-handed husband, and soon enough their marriage of convenience has grown into a passionate romance. But when she meddles in his affairs in an attempt to help advance his career, will it put what they have built together at risk?

Publisher’s Note: The Captain’s Lady contains spankings of an adult woman, including domestic discipline in a historical setting. If such material offends you, please don’t buy this book.

Grace assumed he would slam out of the room and probably out of the house. She had been expecting it the entire time he had been in residence. He couldn’t be comfortable, sleeping on that floor night after night. He could not be content this long on land. It was impossible. Thus, her surprise was complete and paralyzing when he rounded her desk, yanked her out of her chair, and unceremoniously grabbed her waist. Before she could think to object, he had her bent over the desk and was raising her skirts, baring her to the waist. Mortification bubbled over her mind like a kettle boiling over. She hadn’t known she could feel this much embarrassment. He could see parts of her that no man, indeed no other person had seen since she grew beyond the need for help with bathing. The next instant, however, she heard the crack of his palm landing on her unprotected backside and all thoughts of dignity and privacy fled. That spank stung and was followed closely by several others, so she let out a yelp of pain that could probably be heard in the next county. “Ouch! Stop! That hurts!”

“If it didn’t, what would be the point?” The words escaped through gritted teeth. That he was seriously annoyed with her was made patently clear by his quick, firm slaps and his continuous scolding. “I have been tolerant. I have been patient. I have tried to allow you time to adjust to your new circumstances, but hang it all, you are my wife and I will not brook such disrespect!”

“But this is… this is intolerable! You provoked me!”

“I tried in every way to mollify you. Perhaps that was my mistake. I will make it no more! You will speak to me candidly, but with decorum and in a manner worthy of your gentle upbringing and sweet disposition. I will not be spoken to like an erring servant. In point of fact, you treat erring servants better than you treat me. This will now end. Do I make myself clear?”

As he spoke, he spanked. His hand, roughened and hardened from years at sea felt like she imagined any paddle might. Her bottom hurt as much as it had done the day he took his crop to her, though in a different way. The burn intensified with every swat, seeming to bloom on her skin, even between spanks. She twisted and squirmed to get away, but to no avail. He kept one hand firmly on the small of her back.

Grace bit her lips together, trying to keep from speaking, but eventually, the pain overcame her pride. “Rory, please, I’m… I’m sorry. Please, stop!” she begged.

“Will you promise to address me more respectfully in future?” he demanded.

“Certainly. I do apologize and I promise to speak more respectfully.” She moved as if to stand, but Rory held her more tightly. To her own surprise, she felt a certain relief when he refused to let her go. She had only attempted to escape his grasp because she felt he expected it of her. She found herself longing to listen to his every word, to please him in ways she could only learn from him. These feelings were as mysterious as they were compelling and she held her breath, trying to fight them and enjoy them at the same time.

“Just one moment, young lady. We have matters other than your tone to settle.”

2017-02-05
+admin
Previous: The President’s Little Sweetheart by Shelly Douglas
Next: Theirs: Found and Claimed by Ashe Barker