The Captain’s Rules by Katy Swann 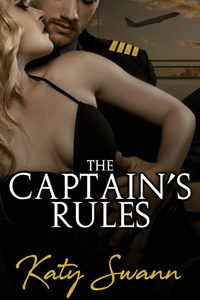 Though airline co-pilot Alex Forster has often wondered what it would feel like to be spanked by a firm-handed man, she never would have expected that man to be Captain Matt Jensen. When she pushes Matt too far during an outing with their flight crew, however, Alex soon finds herself over his knee with her cheeks blushing and her well-punished bottom burning.

Matt’s bold dominance and strict correction leave Alex feeling vulnerable and conflicted yet also deeply aroused. A whirlwind romance begins between them, and over the coming days Alex discovers that submission is much harder in real life than it is in her fantasies, especially when Matt pushes her to her limits and punishes her sternly every time she disobeys.

Despite her misgivings, when Matt takes Alex in his arms his skillful mastery of her body proves more pleasurable than she would have thought possible. But after an in-flight emergency puts Alex in a life-or-death situation, will the resulting events bring them together or tear them apart?

Publisher’s Note: The Captain’s Rules includes spankings and sexual scenes. If such material offends you, please don’t buy this book.

Matt strode across the room and sat down in a large wooden throne-like chair. He leaned back, placed his arms on the armrests, and stared at me with intense scrutiny. “Strip,” he ordered, his voice deep and commanding.

I swallowed. Oh, crap, what the hell had I agreed to? But then reason reminded me that nobody would see me except Matt. I had a nice figure, so why was I suddenly so self-conscious?

I jumped at the sharpness of his voice. My first instinct was to retaliate but, for some reason, I remained silent. As I started to unbutton my blouse, I had to look down, to see why it was so hard to do. When I saw my trembling hands I was even more baffled. This was so unlike me. I’m never nervous. Then, as I fiddled with the last one, it dawned on me. I wasn’t nervous. I was aroused. I liked being ordered to strip. Stunned, I looked across at Matt. The warmth pooling between my legs at his stern expression confirmed my suspicion. Taking my time, I shrugged the blouse off my shoulders, then undid the zip of my skirt. It fell to the floor, leaving me in just my bra, panties, hold-ups, and high-heeled shoes.

I reached back and undid the clasp. Without looking, I knew my nipples had bunched into hard peaks as it slid from my body, exposing my bare breasts. It definitely wasn’t because I was cold. Next I hooked my fingers under the silky material of my panties then pulled them down to my ankles. I stepped away from them and looked at Matt for approval.

“Keep your stockings and shoes on,” he said, his voice husky.

“They’re hold-ups, actually,” I retorted before I could think.

He raised his eyebrows, one corner of his mouth turned up in a sort of half smile.

He nodded then rose from the chair and strode over to stand in front of me. His presence demanded my full attention and he had it.

Oh, yes, I’d forgotten about that bit. I wobbled with the grace of an elephant as I flopped to my knees then reached my hands behind me and locked my fingers together. As I bowed my head like I was supposed to, he placed his hand on it and stroked my hair. I leant subconsciously into his touch, wanting more. Little butterflies fluttered inside me as my tension started to ebb away.

He then bent down and put his lips against my ear. “Good girl,” he whispered. “You’re beautiful. I’m going to inspect you now. Remain still.”

Inspect me? I stayed as still as I could while he circled around me. I could feel his eyes scrutinizing me, assessing me and I didn’t mind one bit. Somehow, I wanted his approval. The fact that I was naked and kneeling at his feet while he was fully dressed only added to my growing excitement. Finally, when he’d been around me twice, he stopped in front of me.

I raised my head and met his gaze. The raw power in his eyes made my muscles turn to mush as I felt myself falling farther under his spell. This was what I wanted, yet had been fighting against.

2018-01-27
Chris
Previous: Owning Their Pet: A Dark Sci-Fi Romance by Marlee Wray
Next: The Oak Street Method: Frankie and Mary by Emily Tilton