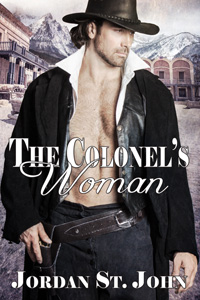 Earning an honest living is a challenge for a woman on her own in the rough and tumble western town of Ketchum, Idaho in 1896, and given her circumstances, renting rooms to a few boarders seemed like a good option for a young widow like Emma Weston. But Emma never counted on a man like Colonel Nathan Bradford taking up residence with her.

Colonel Bradford’s commanding presence quickly proves useful for keeping order in Emma’s home—as does his willingness to take misbehaving young ladies out to the woodshed—but soon enough it is Emma herself who finds her bottom bared for a sound strapping from the firm-handed officer. Her sore bottom only further kindles her growing desire for the handsome colonel, and his dominant lovemaking awakens her passion as nothing ever has before.

But just as love starts to bloom between Emma and the colonel, the harsh realities of the west intrude upon their romance. When the town is attacked and Emma is captured by a notorious band of outlaws, Colonel Bradford will need every bit of his skill, his courage, and his fighting instincts to bring them to justice and take back his woman.

“Tame me? Why, Nathan Bradford, whatever makes you think you can tame me?” She said it with a sense of mock outrage. Secretly she was thrilled. He had just told her he loved her. She didn’t care about anything else.

“So,” she said, pulling away and sitting straight up. She huffed her chest out and put her hands on her hips. “Just how do you propose to tame me?”

Nathan understood when a challenge was being issued. He narrowed his eyes. Remembering what she had told him about her desires, he countered: “I imagine a well warmed bottom or two might do the trick.”

“You’re a cad and you wouldn’t dare!”

Now that was a challenge if there ever was one, he thought. “That’s where you’re wrong, Mrs. Weston.” In a single smooth motion he took her by the wrist and pulled her across his lap.

“Eeek!” she squealed, fluttering her arms about.

She thrust out her hands to stop her forward motion which permitted Nate to toss her skirts up in back without interference. Underneath she had on lacy drawers.

Smack! Nate’s palm struck Emma’s shapely bottom in rapid succession. They were light spanks, calculated to excite and tease. For Nate, the feel of Emma’s satiny bottom, rippling sensuously as his hand spanked, was enough to cause his manhood to rise.

2015-06-14
+admin
Previous: Buying His Mate Reaches #1 in Sci-Fi Erotica!
Next: Shared and Examined by Bella Jackson