The Commander’s Mate by Morganna Williams 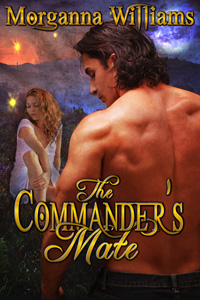 While she struggles to change a tire on a lonely road late at night, Izzy’s quiet, uneventful life changes suddenly and drastically when Grayson—a huge, handsome male from the planet Ramel—comes to her rescue. Earth has recently entered into a treaty which gives each Ramelian male the right to select a human woman as his mate, and to Izzy’s shock, Grayson chooses her.

Grayson tries to reason with his chosen mate, pointing out that she’ll be the wife of the high commander of the Ramelian fleet, but when discussion proves useless he pulls her over his knee, bares her bottom, and gives her the first spanking of her life. He will be a kind, fair, and loving husband, but he will be obeyed.

Despite her protests, once aboard Grayson’s ship Izzy receives a thorough, intimate, and deeply embarrassing medical examination as her new husband watches. It is only when Grayson takes her to his bed that Izzy begins to look forward to her future. He proves himself an attentive and skilled lover and she is almost instantly overcome with desire for him.

But even as Izzy finds herself falling in love with Grayson, she wonders if she can ever adjust to life as the commander’s mate. She craves his touch, but can a man who dominates her body so utterly also lay claim to her heart?

At the end of his rope, Grayson unwound her arms from his neck and grasped her wrists firmly in one hand, then used the other to unwind her legs before sitting himself on the doctor’s stool and dropping her face down across his lap.

“What are you… no-o-o… you can’t!” Izzy wailed as his fingers hooked in the back of her sweatpants and then jerked both them and her panties to her knees.

“I’ve had enough, Isabella. I’ve tried to be lenient and understanding, but you will obey me. Perhaps after a sample of what your defiance will earn, you will behave more appropriately.”

Finished with his lecture, Grayson began to apply the palm of his hand vigorously to the full inviting globes of her upturned backside.

“Owww! Please… don’t… stop… please!” Izzy cried as she wriggled over his lap, trying to avoid his paddle-like hand.

He brought his hard hand down across her upturned cheeks again and again. His little fire reacted to correction exactly as a Ramelian woman would, wriggling her round bottom in a desperate attempt to escape the fire he was rapidly building in her posterior. Knowing the spanking he was delivering to be a relatively mild one, Grayson ignored the pleading cries coming from his now frantically wriggling little mate.

He enjoyed watching her round bottom flatten and spring back with each spank and the way his little mate’s flesh bloomed with increasing color with each well-placed swat.

Grayson took her white bottom from pink to red to crimson before he was satisfied he’d taught the lesson he intended.

He pulled her pants back up and then stood the sobbing Isabella back before him. “Now, do you think you can be a good girl?”

“Yes, sir,” she said with a loud sniffle.

Grayson smiled and cuddled her close, kissing away her tears as he rubbed her back. “There… there… it’s all over. You took your punishment well, little fire. You’re forgiven.”

When her crying turned to miserable little sniffles, Grayson placed her up on the table and called the doctor back to the room.

“Poor dear. She’s overwhelmed, commander. Nothing to worry about. These little earth women appear to be high-strung. First we’ll run a quick scan.”

The scan only took seconds. “All of her organs are in good shape. I’d say she’s about forty earth years and should be able to have a long healthy life with you and produce good offspring. Of course I will need to give her supplement shots for a few weeks until her body becomes used to healthy air and good nutrition. Once those take effect, her organs will renew themselves, including her reproductive system.”

“She said she was unable to have children,” Grayson told the doctor with a frown.

“I’m sure she believed it to be so; the poor air quality and nutrition cause the reproductive organs of the earth females to shut down at an early age. Though their bodies are still functioning, I believe many women on earth choose not to have children after a certain age because of the risk of birth defects. Which are of course another result of poor air quality and nutrition.” The doctor smiled at the commander. “Now, young lady, if you’ll remove your clothing, we can finish your exam.”

2014-09-08
+admin
Previous: The Firm Hand of the Law by Loki Renard
Next: Broadway Baby by Alexandra James