The Commander’s Pet by Samantha Madisen 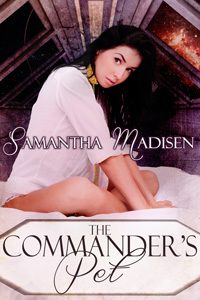 Nineteen-year-old Alana hates her life on her uncle’s merchant spaceship, and she is used to his lack of concern for her happiness, but she is nonetheless quite shocked when he agrees to offer her as a gift to Galath, a powerful alien commander who plans to make her his pet.

Moments after she is brought aboard Galath’s ship, Alana is ordered to disrobe completely. From now on, she will wear nothing but a leash and collar, so that her beautiful body will be available for her owner’s enjoyment any time he pleases. Galath makes clear that he will expect absolute submission from his pet, and disobedience will earn her a painful, humiliating spanking.

To Alana’s surprise, Galath’s stern discipline arouses her intensely, and soon she is quivering with desire as she is brought to a blushing climax by her handsome master. Over the coming days she is taught what it means to surrender fully to a dominant man, but when the time comes for her to be publicly claimed in the most shameful way possible, will she be ready?

As Alana stopped squirming, something changed in the way Galath was correcting her. Each spank became harder and heavier. They slowed and the time between swats lengthened as his large palm lingered on her bottom. This only made her more aware of the fact that her bottom, which by now must have been bright red, was completely exposed to her new alien master.

This caused more wetness to pool between her legs, soaking the soft folds of her pussy. Alana gasped and bit her lip as the alien’s palm lingered even longer on her round cheek. She felt his fingers close around her soft flesh as he kneaded it slightly.

Her pulse quickened, causing her heart to pound inside her chest. She had no idea what was happening now, or why her body was reacting in this way. Shouldn’t she be scared, or trying to run or at least showing her disapproval of the way he was handling her?

Alana couldn’t bring herself to do any of these things. Her attention concentrated on the feeling of his rough skin on her bottom. She realized that a part of her never wanted him to lift his palm from her rear.

Galath moved his hand, causing the tips of his fingers to press closer to her pussy. His touch lingered for a moment before he let go and stepped away.

Alana opened her eyes. She realized the position her body was in. Her forearms were flat on the table and her knees were tucked under her chest so her bottom was pushed high up into the air. She also became painfully aware of the fact that not only was her pussy completely exposed in this position, but it was leaking the hot fluid again.

Her face went as red with shame as she imagined her bottom must be. All it would take would be for Galath to step slightly to one side and he would be able to see how wet she was. Alana consoled herself with the fact that even if he did see it, he would probably not know what it meant. He would certainly not know that it was accompanied by the funniest little tickle beneath her belly, a feeling that would just not go away.

“I don’t want you to think you’ve been corrected unfairly,” Galath spoke in his deep baritone. “You may look at me, pet,” he advised.

Alana turned her eyes toward him. And this time, as her gaze settled on the well-muscled alien, the tickle seemed to grow inside her until it was almost painful. This was the man who had just spanked her. This was her new owner. He could do with her whatever he pleased. It was a terrifying thought but now, beside the terror there was an excitement. An excitement that he might do just that.

What if he decided to walk behind her and saw how wet her little pussy was? And what if he decided to find out where that wetness was coming from? He owned her, after all. She would have no choice but to let him push his thick finger into her tight little hole. She almost gasped at the thought. Where had it come from? And why in the universe would a girl have such a thought? Almost as if she wanted something like that to happen.