The Count’s Discipline by Emily Tilton 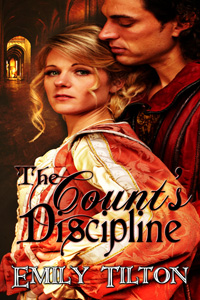 When Robert de Lourcy’s wife spurns his desire to spank her, the young count contents himself with disciplining other women of the court, until a rash decision to chastise the women of a captured castle arouses the ire of the local bishop and Robert is forced to seek absolution. In an act of penance, he visits a cathedral and stumbles upon a young girl named Sophia who has been set upon by robbers. Remembering his promise make amends for his sins, Robert takes pity on the destitute child, placing her in a convent so that she may be properly educated.

When Sophia comes of age, the nuns at the convent grow more firm with her. The young woman is simultaneously drawn to their discipline but also unconvinced that their motivations are particularly noble. After Sophia’s education is complete, Robert brings her into his household to serve as his secretary. Though he has decided to never spank another woman again, when Sophia begs him to chastise her as the nuns did he cannot resist the opportunity to take her over his knee.

The two begin a happy relationship based on Sophia’s acceptance of the count’s discipline, but he remains devoted to his wife until she dies tragically in childbirth. After that sad event, Sophia expects the count to marry another noblewoman, but will that new wife be jealous and send her away? Is she doomed to be cast back onto the streets from whence she came, or will Robert break the shackles of society and wed a commoner?

Also note that this book is written with a unique style: the story is told through a modern woman who has discovered an account of the life of Robert de Lourcy which was written by his secretary and chronicler, Sophia.

“Bare your bottom and lay yourself down, now,” said the count.

With practiced hands, I pulled up my gown and my shift so that the gown hung to my knees in front and exposed my hind part in back. I always colored at the thought that the count might sometime decide he wanted to lift my gown and shift in front and see my charms there and touch them; I thought about it nearly every night in my bed, but of course he never had. My bottom bare now, I put myself over his lap, my head hanging low and my naked rump exactly where it should be.

“I am seriously displeased with you, Sophia,” he said, as he began to spank me. My spanking over his lap was always the occasion for words of correction, which seemed to increase the shame greatly. As I always did, I began to cry both for the pain and for the shame. “You shall have twenty lashes of my strap to remind you tonight that there are some duties that must not be forgotten.”

I gave a little sob at the thought. His hand went relentlessly from the center of my bottom across the little valley where I always felt it also, to my shame, in Venus’ garden, to my right cheek, to my left cheek. The familiar glow spread through the whole region, even as I heard myself making my little cries of pain.

“What sort of young lady needs to have her bottom reddened by her master?”

“A naughty one, My Lord,” I said. The question and answer always signaled the end of the lap spanking.

“Very well,” he replied, stopping the spanking. “Stand up and show me your naughty bottom.”

I was allowed to rub at this point, and I always did, standing in front of him. Sometimes I would hear him make a little noise in his throat, as if he were preventing himself from saying something. If my offenses had been small, he would then instruct me to lower my gown, and he would turn me around and give me his pardon.

This day, though, he said, “Over the block now, Sophia, and see to it that your bottom stays bare.”

2013-12-24
+admin
Previous: Claiming Sarah by D.W. Collins
Next: The Education of Eliza Smith by Jane Fairweather