The Darlington Incident by Renee Rose 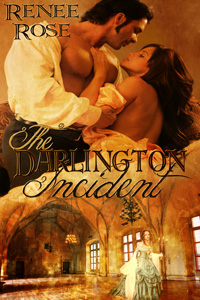 The note read simply: Meet me at the Westerfield Estate gatehouse at midnight during their Ides of March ball. Bring the twenty-five thousand in notes to exchange for the plans.

Though spymaster John Andrews does not know the identity of the plotters, he is determined to catch them at their treasonous game. Posing as Lord Darlington, he joins the Westerfield weekend fete. Resourceful and clever, he is ready for anything… except falling for his prime suspect, the lovely wallflower Miss Eliza Hunt.

When he finds secret government documents hidden in Eliza’s trunk, his temper gets the better of him and he takes her to task, applying a riding crop to her bare bottom. But new evidence leads him to believe Eliza may be innocent and John fears he can bid farewell to his career after getting fresh with the daughter of the wealthy and well-connected Hunt family.

Eliza knows Lord Darlington is not the gentleman he purports to be, but he is the first man to see beyond the ugly birthmark on her face and treat her like a beautiful woman. As he draws her out of her shell and demands she let go of her self-doubt, his claim on her heart grows stronger, even when it becomes clear he stands ready to punish defiance with firm chastisement!

John cannot wait to catch the traitors, clear Eliza of all suspicion, and then claim her as his own, but at the same time he fears his darker desires may mean he is not the sort of man worth having as a husband. Can her whole-hearted love free him from the demons of his past?

This book is a sequel (though also stands alone) to The Westerfield Affair and The Reddington Scandal.

“I found the papers, Miss Hunt.”

She recognized the menacing voice. It belonged to Lord Darlington—or whatever his real name was—and the difference in it sent chills down her spine.

“To whom will you sell them? Or did you buy them?” He sounded angry. He did not release the tight grasp around her waist, but he eased his hand from her mouth for her answer.

“I do not know what you mean!”

“Do not lie to me!” he shouted, giving her a shake. He dragged her forward, pushing her belly down over an old saddle lying on a crate. The gatehouse appeared to be used as overflow for stable equipment, the smell of old leather and hay filling her nostrils. Pulling her wrists behind her, he tied them with a cord.

“What are you doing?” she cried in alarm.

“Silence!” he snapped and she heard the sound of something swishing through the air a second before a line of fire across her backside made her scream. She looked over her shoulder to see Darlington flexing a riding crop between two hands. Panicking, she struggled to stand up, but he pushed her torso back down, leaning his hand on her low back.

“Your rabbit act was very good. You nearly had me fooled,” he said and further terrified her by pulling up her skirts. He yanked her pantalets open at the split, baring her bottom to his view.

She fought him, trying to stand, but could not wriggle from his iron grasp.

“Did you recognize me for what I am?” he demanded, applying the crop across her bare cheeks.

Tears sprang to her eyes and she gasped in pain.

“Did you hope to distract me from my purpose with your charms? Was that your plan?” he demanded, whipping her again with the terrible crop.

“Silence!” he snapped, applying the horrid crop even harder than before. “Do not speak unless I ask you a question.”

“But you did ask—” she bit off her protest as another stroke made her gasp.

He tapped the crop against her smarting flesh, the momentary reprieve only making her aware of her exposure, imagining what the sight of her naked buttocks must look like to him. “Do you know,” he said in a slightly calmer voice, “you are the only woman I have ever wanted to court? The joke was on me, was it not?” he asked bitterly and sliced the crop down again.