The Delinquent Bride by Carole Archer 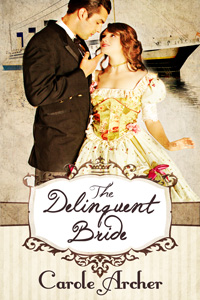 Facing a marriage with a man she has never met and certainly does not love, twenty-one-year-old Shelley Robertson-Bell flees from her home and the life of luxury to which she is accustomed. With nowhere else to go, it is only the kindness of a stranger which allows her to board the mighty ship Titanic just hours before it leaves port on its maiden voyage.

Once aboard, she soon discovers that life as a maid—the identity she was forced to assume in order to secure her passage—is very different from anything she has experienced. Her new employer, a rich, handsome American businessman named Henry Kendall, is not one to tolerate laziness or disrespect, and he has no qualms about taking a disobedient young lady over his knee for a sound spanking on her bare bottom.

Though mortified by the shameful nature of his chastisements, Shelley also finds herself excited in a most unladylike fashion. As she spends more time in Henry’s company she cannot help but begin to entertain hopes that Henry might one day see her as more than just a servant. It is not long, however, before fate intervenes and the lives of Henry and Shelley are changed forever.

Buy This From Kobo

Shelley gasped when Henry suddenly grabbed her wrist and halted her retreat from the room. He pulled her back towards him and marched her through to the sitting area of his suite. Shelley immediately started to panic as Henry muttered under his breath and dragged a straight-backed chair across to the centre of the room. Shelley’s mouth dropped open when he sat down, shook his head angrily, and tugged her effortlessly across his lap.

“No,” she shrieked, immediately trying to push up from such a humiliating position. She barely knew the man, yet he was taking such liberties. “I’ll do it now if it’s so important to you.” Shelley was outraged that Henry saw fit to treat her like a common servant. She had witnessed her father physically chastising the maids when dissatisfied with their work, and she could barely believe this man felt he could handle her in a similar manner. It didn’t occur to Shelley that she was now one of Henry’s staff, and he was dealing with her as he would any other disobedient maid.

“Miss Ellis,” he snapped, punctuating his words with a hard smack that took Shelley’s breath away. Her behind was still tender from her mother’s chastisement, and the sharp slap instantly burned. “I have high standards of cleanliness, and if I say something is not clean enough, you clean it. You do not argue with me. You do not offer your opinion. You do as you’re told. I pay you to clean, not to debate with me. And when I’m paying your wages, your time is mine to waste as I see fit.” As Henry lectured her, he landed several stinging smacks to her upturned bottom.

“I demand respect from my employees, and if I do not get it I will simply spank you until you learn, as is outlined in the contract that you signed. Do you understand?” he asked sternly, landing six hard smacks in rapid succession to the centre of her squirming backside.

Shelley’s heart sunk at the realisation that she had signed a contract giving him permission to spank her. That would teach her to read things. Her father had always told her to check the small print, and now she wished she had listened to him.

Shelley had been holding her breath, hardly able to believe what was happening to her and how painful it was on her already bruised bum. When Henry started to lift her dress, she finally found her voice. “No, stop, you can’t do this to me!”

“Oh, I think you’ll find that I can, young lady.” Henry swept Shelley’s dress up onto her back and rested his hand against her bloomers. “Learn how to behave and this won’t be necessary again, but if you continue to question my decisions you’ll find yourself once more across my knee, getting a spanking on your bare bottom.”

Shelley’s mouth dropped open. “You can’t bare me,” she yelled. She instantly shrieked in distress when he decided to prove her wrong, took a firm grip on her bloomers and tugged them down. Shelley kicked her legs frantically, and clawed at the floor when Henry’s palm pressed down against her bare flesh. Her cheeks burned with embarrassment and she closed her eyes, her mind unwilling to process what was happening.

2014-05-30
+admin
Previous: The Art of Discipline: Running Toward Trouble, Book Two of the Mockingbird Chronicles by Stardawn Cabot and Alexandra James
Next: Driven Wild by Jaye Peaches