The Demon’s Woman by Melody Parks 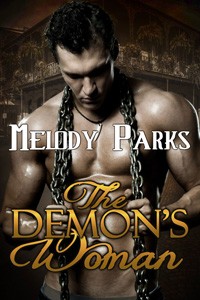 From the moment Landon Reed sets his eyes on beautiful Amy Piers, the fire she stirs in his blood drives him nearly mad with lust. Contending with the dark, savage impulses he inherited from his demon father is hard enough under ordinary circumstances, and resisting his fearsome need to lay claim to Amy is a truly daunting task.

But Amy’s sister holds the key to breaking the curse that sets Landon’s blood on fire, and those who serve his father will stop at nothing to keep that curse intact. To make matters worse, Amy is headstrong and defiant and Landon knows he is the only one who can protect her. He is left with no choice but to compel her obedience in order to keep her safe, even if that means taking her over his knee for a painful, embarrassing spanking as often as she makes it necessary.

Landon’s firm-handed discipline only increases Amy’s powerful attraction to the handsome half-demon. But if she were to yield to her own desires and beg him to take her long and hard, she fears that his mastery of her body would be so complete that she would surrender herself utterly to him forever. With danger all around them, can she trust Landon to protect her from their enemies… and from himself?

He reached for her wrist, but she pulled it away, trying to scoot to the other side of the seat. “I guess we do this the hard way,” he growled, grabbing her foot, pulling her back despite her struggles and then wrapped a firm arm around her middle, pulling her out of the truck.

“Stop it,” she squealed, squirming and hitting his shoulder. “Put me down!”

Carrying her to the back of the truck, he opened the tailgate with his free hand and sat down on it, putting Amy’s struggling body over his lap. With his strength it wasn’t hard to restrain her.

“Stop! What do you think you’re doing?” she cried.

She found out a second later when his hand met with her jean-clad bottom. “Giving you what you need and teaching you some respect,” he growled, landing one swat after another.

“Looks to me like you don’t have much choice in the matter,” he said gruffly, leaving no area uncovered. “Be thankful this isn’t on your bare ass.” He focused more on her lower cheeks, swatting them over and over.

He let out a hearty laugh. “Really? How old are you?” he asked.

“Twenty-four,” she ground out through gritted teeth, kicking her legs back and forth.

“Then I suggest you start acting like it and take your spanking like a good girl.” He placed a few carefully aimed spanks to the backs of her thighs, listening to her howl and gasp for breath. “I’ll behave… just… ooh… stop!”

But he didn’t stop. He moved back up to her plush round bottom and peppered each cheek until she was sobbing and eventually he felt her body go limp, giving in to the punishment he delivered. He knew then she’d had enough.

“You know I had no more choice in my life situation than you did. Do you think I chose to be born a demon and live with this curse? No. Not anymore than Laynett had when Isabella possessed her, or than you had in having her for a sister.” As he lectured, he didn’t stop rubbing away the burn he’d created in both his hand and undoubtedly her hind end. “Now, then, do you have anything more civil to say to me?”

“I’m… I’m sorry,” she uttered in a tiny voice that made his heart melt.

“Shhh,” he soothed, turning her and pulling her up into his lap.

She instantly put her arms around his neck and her head on his shoulder, clinging to him as she caught her breath.

2015-10-10
+admin
Previous: His to Conquer by Kallista Dane
Next: Claimed by the General by Sara Fields