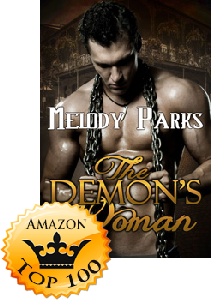 Melody Parks‘ newest release, The Demon’s Woman, is holding down spots on Amazon’s Top 100 lists for both Paranormal Erotica and Action and Adventure Erotica! Congratulations, Melody!

★★★★★ Meredith O’Reilly @ Amazon.com  “A Unique, Hot Story!” on October 11, 2015
The Demon’s Woman is a unique, HOT story. Poor Landon was cursed from the moment of conception. His father was part demon, his mother part human. Landon led a normal life until his 19th birthday when he discovered that he was very different. Now wanting to stop his demonic side, Landon searches for the witch who helped his father to rid himself of the demon within him. But he can’t do it by himself and ends up relying on the help from mainly Amy. A sweet, yet head strong young woman that craves a D/s relationship as much as Landon.

I have to say that I really enjoyed this story because it is one of a kind. To many times will I pick up a story and be less than halfway through and be able to predict what’s going to happen. That wasn’t the case with this story. Ms. Parks has several twists and turns in her story that left me stun.

The characters in this book were fantastic. I really felt poor Landon. The man had to go through fire (literally) to overcome the demon side within him. Despite the fact that it would have been a lot easier to just give up and embrace his demon side, Landon kept fighting. I also really liked Amy! She was thrust in to a situation that she didn’t quite understand, but she stood by Landon.

What really made this story a five star one was the hot sex scenes. I ended up fanning myself a few times while reading this. 😉

★★★★★ DFT @ Amazon.com “A demon I’d like to meet!” on October 12, 2015
This is one hot alpha Demon. Cursed from birth, Landon is unaware just how unusual he is until his 19th birthday when his turning takes place.
Destined by his father to pass on his curse and create more blood demon’s on earth, he refuses after finding out what blood lust does to him and fights his demonic urges. But when he meets Amy it becomes all the more difficult to keep himself under control. As much as he wants to claim and ravish her, he can’t for fear of passing on the curse.
I won’t tell you how he overcomes his curse, but I will say it’s one HELL of a sultry ride.
The naughty bits will have you panting.