The Devil of Whiskey Row by Renee Rose 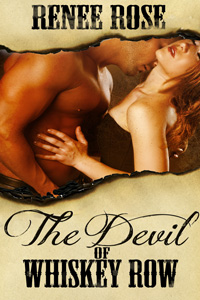 Forced by miserable circumstance to work in a gold rush brothel, Cora Underhill hates what her life has become. When a fire sweeps through, she welcomes death as an end to it all. But then Jake Diggory crashes through her window for an unwelcome rescue, offering her shelter and a paid position at his establishment. She accepts, in spite of Jake’s fearsome reputation as ‘The Devil Diggory’, and soon sees another side to Jake—the firm but caring side of him which led his girls to name him ‘Daddy Diggs’.

Life at Daddy Diggs’ is an entirely new experience for Cora. Jake has strict rules which he backs up with over the knee discipline, but he will not tolerate any mistreatment of his girls and he can go from playing beautiful music on a piano to defending them with his bare fists. The strangest thing of all, however, is the fact that every girl at Daddy Diggs’ swears that Jake has never slept with her, or with any other woman for that matter, since his fiancee’s death back in Ireland fifteen years ago.

The other prostitutes at Daddy Diggs’ enjoy the power they hold over men, enjoy making money, and even find pleasure in sex. Cora attempts to emulate them, but she still finds no pleasure in the company of men… until the day she inadvertently arouses the passion of The Devil Diggory and his fierce lovemaking thaws some frozen part of her. But it seems Jake is only attracted to her because she resembles his dead fiancee  Confused by his new feelings for Cora and guilt over his broken vow of celibacy, Jake pushes Cora away. Can he come to terms with his past and claim Cora for his own, or will his grief keep them apart forever?

“What do you think your parents would think to hear you use language like that?”

At the mention of her parents, she recoiled as if he’d slapped her. Her face flushed in anger and she stood up in the water, hands balled into fists. “Go to hell!”

He groaned inwardly, but reached for her wrist and tugged her toward him, out of the tub. He never made a threat without following through. He pulled her across his lap and without preamble, began to spank her wet bottom soundly. The water sprayed in tiny droplets with each loud smack of his palm, increasing the sting for both of them. She kicked and listed to the side to escape, but he held her firmly around the waist, pinning her legs with one of his and paddling her round cheeks. He spanked and spanked, hoping her struggles would cease and he could let her up, but she seemed determined to fight him. He continued to spank until her pale skin held the pink and then began to turn a deeper shade of red. Striated pucker marks stood up in places and she was still fighting him when he gave up on her submission and applied several last hard swats to the backs of her thighs. He rested his tingling hand on her heated flesh.

He could hear her ragged breathing, but she hadn’t uttered any cries or whimpers, nor had she pleaded for him to stop. He rubbed her bottom lightly. It was perfectly shaped, like two round orbs—the firm muscle offering a satisfying, springy target. He didn’t know how Smoochy had disciplined Cora, but he imagined it was far more brutal than spanking.

Jake loved to spank. He loved the act of spanking and he loved that his girls submitted willingly to his discipline—even seemed to crave it as attention from him. Spanking was not overly painful, but it was humbling for the recipient. For the disciplinarian, it was an act of dominance, a declaration of power.

Since he hadn’t achieved her submission, he worked the dominance angle with Cora, spreading her cheeks and pressing his middle finger to the entrance of her anus. She stiffened like a board, squeezing her cheeks together tightly and lifting her torso horizontal to the floor. He applied several hard slaps to the back of her thighs, this time eliciting a tiny squeak.

She shook her head rapidly. “No!” she gasped.

He ignored her protest, parting her cheeks again and pressing his finger more insistently, until he breached the entryway to her tight hole. She gave a wavering moan. He applied a few more spanks to her blushing bottom and then slowly guided her torso upright, careful not to let his finger pull too much at the delicate hole. He used his embedded finger to draw her closer, so she stood between his knees. He squeezed her tightened bottom with his other hand, kneading the firm muscle and admiring the heat still radiating from it. Her breasts were eye level, as magnificent as he’d suspected earlier—twin peaches with rosy nipples pointing cheerfully toward the ceiling. Already highly aroused from spanking her, he had to resolutely lift his chin to gaze into her face, shifting in his seat to accommodate his hardened cock.

2013-03-20
+admin
Previous: Taught to Kneel by Natasha Knight
Next: Shared Between Them by Korey Mae Johnson