The Doctor’s Captive by Loki Renard 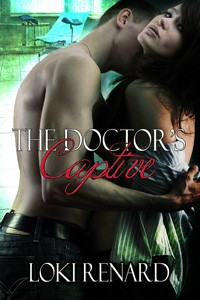 After countless failed attempts to eliminate him, Jason Blake—the deadly rogue agent better known as the Doctor—has finally slipped up and revealed his location. As the best-trained operative in her organization, it comes as no surprise to Katie when she is assigned to take Jason down. But when she underestimates her enemy’s skill and her mission goes horribly awry as a result, Katie ends up as the Doctor’s captive.

Jason has waited five years for this moment, and now at last he has his chance to atone for the sins of his past and free Katie from the corrupt, out-of-control spy agency which brainwashed her and then molded her into a loyal, unquestioning assassin. But Katie’s mind was manipulated in a very specific, deeply intimate way, and the conditioning can only be undone in that same way.

To break through her defenses, Jason will need to strip her bare, punish her thoroughly, and then bring her such intense pleasure that she is left not only blushing with shame and quaking with need, but actually begging him to claim her and dominate her completely.

“Very sloppy,” he chastised her, pulling her arms behind her back before she could recover. A zip-tie was quickly applied, the narrow plastic band a devastatingly effective shackle. Katie focused on keeping her breathing regular and not panicking. Yes, he had her. But she wasn’t dead yet, and where there was life, there was hope.

Cold steel against her lower back made her freeze in place as Jason ran a surgically sharp knife, blade side up, down her back and between the crevice of her cheeks, slicing through her panties and pants as if they were wisps of silk. In seconds she was completely naked from the waist down, her clothing lying on the floor as he hauled her up to her feet and pushed her over the back of an armchair.

His hands were all over her, running up her back, under her belly, around her arms and everywhere else. “Quite a few tricks you’ve got up your sleeve,” he noted, pulling the throwing knives out of their holsters and pulling hidden guns out of the crevices of her clothing. In seconds she was stripped of every weapon she had and left feeling much more naked for their loss.

The Doctor smoothed his hand over her bare bottom and patted her skin. “I’m going to enjoy this next part,” he growled menacingly.

Katie knew what was coming next and steeled herself for it. She heard the sound of his belt being unbuckled and the leather being slipped out of the loops. The sick son of a bitch was going to force himself on her before he put her out of her misery. Cold fury consumed Katie as she once again found the will to fight. She pulled her legs as close to the couch as she could and tried to stand up. He grabbed her by the back of the neck and forced her back down none too gently.

“You coward!” She spat the words back at him. “You disgusting freak!”

He said nothing; he was too busy securing her in place by wrapping rope around her upper thighs and the chair back. She was unable to do more than squirm, she certainly couldn’t stand up or take her feet. Instead she was forced to dangle there, her bare bottom and pussy exposed to one of the most dangerous men in the world.

She looked over her shoulder, determined to show him how much she hated him, and realized that although his belt had been taken off, his pants were undisturbed. He had looped the belt in two and was holding it in one hand. She saw his lips twist in a wry smile as his arm rose, and suddenly she realized that she’d been completely wrong about his intentions. He wasn’t about to have sex with her. He was about to beat her.

“Consider this thrashing punishment for your poor performance,” he drawled. “I expected better from you.”