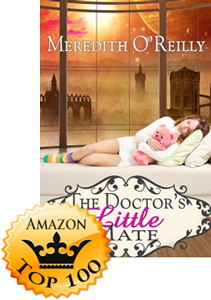 ★★★★★ Amazon Customer @ Amazon.com “A worthy follow up! Loved it.” on August 6, 2016
In this anxiously awaited book 2 in the series, the sub story line of the Auruesian’s treacherous enemy continues and we revisit with some of the characters we fell in love with in book 1, but I think the author does a good job of making The Doctor’s Little Mate enjoyable as a stand alone. But don’t let it! The second in Ms. O’Reilly’s series is as yummy as the first, so you’re going to want to read both. While not a huge fan of age play, the author brings charm and playfulness to her unique brand of a Daddy/little dynamic that I enjoyed very much. That isn’t to say her alpha hero doesn’t dom up and deliver some well deserved discipline when the situation warrants, and there is a lot of steamy hot grown up s-e-x! There are also other elements to enjoy, the overall science fiction plot, new worlds to explore, even a little medical play from the good doctor. All in all, a fun read that will keep you turning the pages and yearning for more when it comes to an end. Hopefully she won’t make us wait too long for book 3.

★★★★★ Bookworm555 @ Amazon.com “An excellent Little Alien Mate story.” on August 5, 2016
An excellent Little Alien Mate story. As stated in the synopsis, this is a standalone sequel to The Prince’s Little Mate. I did not read the first book (but I plan to) and will attest to the fact that it is truly a standalone and I had no problems following the story. The characters from the first story make an appearance and help guide Ian and Maggie. This story actually has age-play and not just her calling him “Daddy”. Even though the story is short, the characters are fleshed out and made for an enjoyable read. The story is not a cliffhanger but the author did leave a thread dangling for the next books in the series. I am looking forward to reading more from this author.

★★★★★ Laurel @ Amazon.com “Delightful Sweet Age Play Romance by Meredith O’Reilly” on August 5, 2016
This was a delightful sweet Age Play story in the second book. The first one was The Prince Little Mate and some of those characters were in this current book. This was a well written story with a wonderful storyline and an exploration of the characters feelings and emotions. There were suggestions of hideous danger with aliens from another planet. There was mild spanking and not too explicit sex and was tastefully done. I was given this book by the publisher for an honest review and the thoughts and opinions are mine.

★★★★★ Amazon Customer @ Amazon.com “Worth every second and every penny!” on August 7, 2016
Picked this book up today for a little casual reading. Planned on spending just a little bit of time on it…I read the whole thing straight through! Great plot, loving scenes. The age-play is well done, not over the top and completely believable. The characters are realistic and have great chemistry. I’m hoping there’s another book coming soon, and will be looking for it!

★★★★★ disney girl @ Amazon.com “Wow just wow!” on August 10, 2016
I love all meredith’s books and this is no exception sci-fy, age play, spanking and romance everything I could ever want in a book and more! This series is quickly jumping to my favorite Series of all time!! I hope she writes the next one soon with the cliff hanger at the end I can’t wait to see what happens next!

★★★★★ SH @ Amazon.com “Sweet, mild age play” on August 5, 2016
This is such a sweet romance with very mild age play! Don’t get me wrong, there is some definite steam but the growing relationship between Ian and Maggie kept me reading until the end. Ian is everything Maggie didn’t know she wanted and as reluctant as she was to give him a chance, he proved he was perfect for her. It was nice to visit, a little, with Allison and Eric as well. I hope there is another book planned! I received this book from Stormy Night Publications as an Advanced Reader Copy.

★★★★★ AmazonAddictedMommy @ Amazon.com “A very sweet sci-fi ageplay book” on August 8, 2016
A very sweet sci-fi ageplay book. The first little scene at the beginning sets to tone perfectly for what’s to happen and the remainder of the book just gets better. Nothing over the top, harsh, or uncomfortable to read, it’s just very sweet. This is one I’ll be keeping and reading more than once. I received and Advanced Reader Copy from Stormy Night Publications.

★★★★★ Christine Campbell @ Amazon.com “Good book” on August 7, 2016
I received this book from Stormy Night Publications as an advance review copy. Age play and spankings. It was hot the we are mates and she is reristing the claim. They build their relationship over the two weeks together it was so good

2016-08-12
+admin
Previous: Tamed by the Virginian Snags a Top 100 Spot
Next: Properly Punished by Morganna Williams