The Doctor’s Pet by Loki Renard 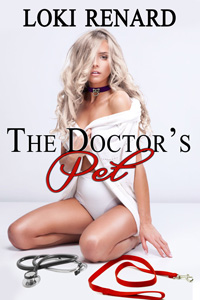 Tessa is sick and tired of working both day and night shifts at her nursing job in order to keep up with not only her own bills, but those of her wildly irresponsible little brother as well. To make matters worse, when she has the opportunity to interview with the tall, handsome new surgeon at St. Heaths, Dr. Kirk Saunders, she is so stressed that she ends up treating him disrespectfully.

Certain that she has blown her opportunity, Tessa is shocked when the doctor escorts her into his private office, bares her bottom, and gives her the first spanking of her life. During the painful, embarrassing punishment, Kirk informs her that if she is going to work under him, her insubordinate attitude isn’t going to be tolerated and she will be expected to submit to his guidance, control, and discipline.

The doctor’s firm hand and stern chastisement satisfy a deeply buried need that Tessa has long sought to hide even from herself, and before she knows it she is agreeing not only to work for him, but to accept his particular form of dominance outside of the office as well. After bringing her to his home, Kirk explains that he plans to train her to be his obedient, well-loved pet, and soon she is wearing a leash—and even more embarrassingly, a tail—and learning to do exactly as she is told. Though the entire arrangement leaves her blushing with shame, Kirk’s absolute command of her body also excites Tessa far beyond anything she has ever experienced.

But despite the pleasure and comfort Tessa finds in Kirk’s strong arms, her financial and family problems still exist, and she is convinced that telling him about her struggles will only cause him to leave her. When Kirk finds out that she has been lying to him, can he find a way to prove to Tessa that no matter how badly she behaves—and no matter how thorough and humiliating the resulting punishment may be—she will always be his cherished pet.

“I want you to turn around and lower your panties,” he said. “And I want you to lean forward, so your face is resting on the bed and your bottom is nice and high.”

It was an intimate order, one that made her blush to so much as think about obeying it. Kirk stood waiting, handsome and unyielding as she began to squirm where she knelt, making a little preemptive whine of protest.

“Tessa,” he said in kind but warning tones. “That was an order.”

An order. One she had to obey. She could feel a glimmer of wetness between her pussy lips, her body’s response to the man who was still holding the leash to her collar. She stared at him, not moving so much as a muscle.

“I think my pet needs a little help,” he said, leaning down toward her. She felt his large, capable hands on her body, applying gentle pressure that made her turn away from him. Once he had her facing in the right direction, he put his hand on the back of her head and pressed it down toward the bed. Her rear came up almost automatically as her cheek met the quilt.

He had not punished her in the slightest and yet she felt entirely captive to him and his desires. Her panties slid over her ass cheeks at the urging of one finger, baring her anus and pussy. Now she felt the collar, tight but not restrictive about her neck as he began teasing a finger up and down the length of her slit.

“Already wet, Tessa,” he noted, putting gentle pressure on the leash. “I think my little pet likes this.”

She gasped as he gently parted her inner lips and dipped the tip of his finger inside her pussy, making a gentle stirring motion before withdrawing his digit, leaving her wanting so much more. She could almost feel her mound swelling with desire, a feminine heat that would not be denied.

“More?” She moaned the question hopefully.

He reached into a bedside drawer and took out a case, making sure to place it where she could see it. It was a fairly deep wooden box, and what it contained she was not at all sure. She was not kept in suspense very long.

He opened the box, revealing a selection of twelve black rubber butt plugs, each of them a different size. At one end of the scale there was a very small one that was only an inch or so long and barely larger than a finger in girth. At the other was a plug so large it made her eyes widen.

2015-09-20
+admin
Previous: Protected and Punished by Shelly Douglas
Next: Staking Their Claim by Ava Sinclair