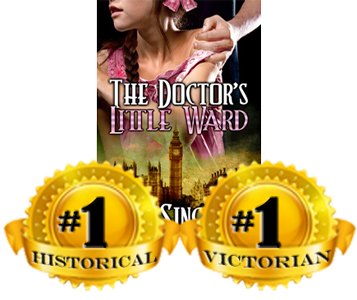 Ava Sinclair has done it again! Her newest release, The Doctor’s Little Ward, has rocketed to the top in two categories on Amazon! This morning it reached the #1 spot in Historical Erotica and it holds the #1 spot for Victorian Erotica as well! Congratulations, Ava!

★★★★★ Nicole Vela From nothing..to something on July 12, 2015
Abigail Barrow, has literally lost it all, with absolutely no prospects. Her only alternative is to become the ward to a physician. With a painful upbringing,she is in her own alternate reality. Unloved and unkempt, this man is an unknown. Will she endure more pain, and no love? Dr. Simon Abbott, has a deep desire to nurture,love and dominate a particular type of woman… a little. When he is visited and told he now has a ward(he is delighted, to indulge in his deepest desires and fantasies). He accepts the terms and conditions. He never realized how his new charge really is.. uneducated in both education and the ways of sexuality(he can educate her..mold her- discipline and love and everything in between). These two are both vulnerable in there own ways. The fact that the relationship was seen as taboo, doesn’t deter them from having what they both want. A strong,disciplined relationship, with love,passion and his firm hand. This has to be the best in the series. Gave the book 5, the storyline is emotional and sexy all at the same time. The characters are sweet,defiant and show plenty of passion and fire. I hope Ava breaks into another series as I would love to see more from Simon and Abigail. And the couples who were introduced in the book! If your looking for sexy spankings, salaciously decadent sex scenes and everything you can image in age play this book is for you. The best one in the series! Can’t wait for more! Sky is the limit!

★★★★★ SH @ Amazon.com “A sweet Victorian AP” on July 13, 2015
Typically Victorian age play can be harsh, but I did not find this one to be so. I loved the romantic and sweet way this story played out. Abigail has had such a hard life and when her father dies she thinks things are only going to get worse but surprisingly she is wrong. Wrong in the best possible way as she gains a new guardian, Simon, who is smitten by her from their first meeting. Their romance starts off unexpectedly and Abigail is against it but as time and circumstances change and develop their love blooms. Great read!

★★★★★ Virgilia Coriolanus @ Amazon.com “and how a marriage to someone like her would differ from the woman that his aunt…” on July 15, 2015
SPOILERS! Not many, but they’re there…..

Nineteen year old Abigail Barrow is brought to Dr. Simon Abbott’s home, by a solicitor hired by her father before his death. His choices are to either marry Abigail and take on her father’s extensive debt, or, by proxy, have Abigail sent to the workhouse to pay off her father’s debt over her entire (most likely, short) lifetime. Simon’s decision is made when he really LOOKS at Abigail and sees how and what she really is, and how a marriage to someone like her would differ from the woman that his aunt wants him to marry….so his decision is made.

I have a small confession–the arranged/forced marriage trope is probably one of my favorites. I always have found it interesting, especially on a historical level–what women have had to go through in order to survive and to be happy. While men had more of a choice, women were at their mercy, and it was up to them to try and make something out of nothing.

One of my favorite parts about this book is how…tender Simon is. The debt that he has to pay off is mentioned only once or twice by him, in the entire book. It is irrelevant, to his relationship with Abigail. And I also liked how he got through to the root of Abigail’s behavior and issues–which is rooted in how she views herself (which is not in a good light)–and reassures her….through words AND spankings. He wasn’t just a Daddy who liked to hit, or to punish for his own pleasure–but also to get to the root of the problem. And I also like that he made sacrifices for towards his own money and social standing (by marrying a “nobody” who came with a ton of debt), and did it for THEIR happiness and health. It wasn’t a sacrifice for him–it was something that he knew would be better for their household and relationship.

I think the author did a good job of balancing Abigail as someone who is vulnerable and shy (two character traits I identify with and love to read about), without making her seem weak. She is someone that I think every woman can identify with with–especially us shy ones.

This is probably my favorite Ava Sinclair book and I hope she does more arranged/forced marriages tropes!

★★★★★ Alicia Janowitcz @ Amazon.com “Another great book by Ms. Sinclair!” on July 12, 2015
Another great story by Ava Sinclair. She’s hit the trifecta of genres in this great series- Cowboys, Highlanders and now Victorian. Well written with great characters, great emotions and plenty of hot, sexy scenes. What will Ms. Sinclair come up with next? Can’t wait to find out!

Dr. Simon Abbott is very much a Mr. Darcy type. He’s quiet and serious and not thrilled when a lawyer shows up requesting he make good on a promise the doctor made to the man who saved his life. The man, Malcolm Barrow, died and his daughter faces the poorhouse to repay her father’s debts if she isn’t protected by marriage. But Abigail Barrow isn’t interested in marriage and the initial confrontation ends in a spanking.

Dr. Abbott agrees to make Abigail his ward so he can train her to be the proper wife. At that point the story becomes very classic age play with all the elements I’ve come to love in Ava Sinclair’s books – spankings, sex, anal play and of course the nanny. I would like to have seen more of her in the story, since I like the nanny aspects and that was my only quibble with the first book (no nanny). But even so there is a good plot, jealous rivals who try to ruin the relationship and a sweet love story with HEA.

★★★★★ Charlie @ Amazon.com “Good read” on July 15, 2015
About overcoming feelings of inadequacy after a bad childhood and starting a new marriage with a wonderful doctor. The H always being supportive and loving.

★★★★★ EuphoriaWasted @ Amazon.com “Reading another Historical work that tingles my toes.” on July 10, 2015
I don’t know what it is that is so addictive about reading this authors work, but it gives me butterflies and goosebumps in all the right places. She brings her characters and settings alive with such vivid detail that its hard not to fall head over heels in love with her. *swoons* It dances around in the place of our secret desires and strokes my dark places.

2015-07-18
+admin
Previous: Bought by the Doctor by Emily Tilton
Next: Claiming Crystal by Melody Parks