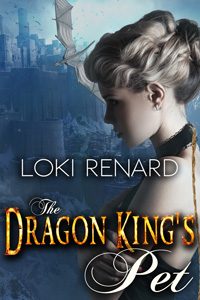 Eighteen-year-old Mika Ferrier has never concerned herself much with stories of the war between men and dragons, but her life changes in an instant when she is pulled through a portal that appears suddenly in her room one night. She awakens in an opulent palace in the company of a huge, handsome man who explains that he has taken Mika captive for her own protection.

Casimer, King of the Dragon Realm, has been watching Mika for a long time. Though she does not know it, dragon’s blood flows in her veins, and she will never truly be safe on Earth. But while he brought Mika to his world to keep her safe, when Casimir realizes that she is in desperate need of taming he decides to claim the beautiful, headstrong girl as his pet.

After Mika is stripped bare and spanked thoroughly, her owner sets about training her, and soon she has been fitted with a leash, collar, and tail. Yet even as she blushes crimson while kneeling naked at the dragon king’s feet, Mika cannot help yearning for him to take her in his arms and make her his own. But can she dare to hope that one day she will be more than merely his pet?

Publisher’s Note: The Dragon King’s Pet is a stand-alone book which is the third entry in the Dragon Brides series. It includes spankings and sexual scenes. If such material offends you, please don’t buy this book.

“What was it you said?” Casimer gave her a handsome smile. “Ah, yes, a pet must walk on all fours, must not speak… and must have a tail…”

He produced a thick rubbery looking plug from the box. It alone would have caused Mika some concern, but she was horrified to see that it came complete with a little puff of white fluff in a similar hue to her own dyed locks.

“Oh, yes, my pet. You need to be taught precisely what it is you are. This little tail will do the job admirably, I think. Go to your hands and knees for me. Present your bottom.”

“I could spank you first and put you into position over my lap,” Casimer offered.

“No…” Mika let out a low, pitiful whine. It did nothing to sway the dragon king. He was quite stern in his insistence and she soon found herself on hands and knees, her bottom presented to the monarch as he dabbed a slippery grease on the tight little bud of her rear.

“You may find you like this, pet,” he chuckled, seeming to enjoy her embarrassment.

“I don’t think so,” Mika moaned. Casimer wasted no time in introducing the tip of the plug to her bottom. She cursed inwardly, wishing she’d never made the comment about the tail. This king was a deviant ready to take inspiration from anywhere, so it seemed.

“Now, relax, my pet,” he soothed, running one hand over her bare cheeks. “It will slip in much more easily if you do not tighten your bottom.”

She could hardly believe it was happening, but she managed to somehow surrender to the moment. Casimer’s murmurs of praise made her blush as he worked the plug into her ass, toying with her in a place she had never imagined she would be touched.

The pliable rubbery tip passed through her sphincter quite easily, but the widening shaft was not so simple to take. As much lubricant as was spread upon the king’s tool, Mika whimpered and moaned as it was pushed inside her with an insistent pressure.

“Settle and breathe,” Casimer commanded. “You are holding your muscles too tight.”

“That part of me isn’t made for big things to slide into,” Mika complained, her fingers grasping at the sheets. She was surrounded by riches, lying against the most luxurious silken sheets she had ever touched. She should have been feeling cosseted and cared for, but the thick probe spreading her anus wide left her feeling small and vulnerable and more than a little sore. Casimer knew how it would make her feel. It was part of his ongoing campaign to humble her and make her feel as though she were little more than a human pet. The dragon king firmly believed that her blood made her lesser than others—or perhaps it was simply that she had failed to give him proper respect in the beginning.

Everybody in the palace treated him like he was practically a god. Mika had met several kings in her lifetime. They weren’t that special. They put their pants on one leg at a time just like everybody else… but that was back on Earth, where monarchy was a relic. Here, in the dragon realm, Casimer’s power did seem to be absolute. Nobody was going to rescue her from the dragon king’s grasp, and as his fingers slid over her erect clit, she wasn’t sure she wanted to be rescued.

2017-07-30
Chris
Previous: Her Alpha Cowboy by Mary Wehr
Next: Reformed by the Scotsman by Katie Douglas